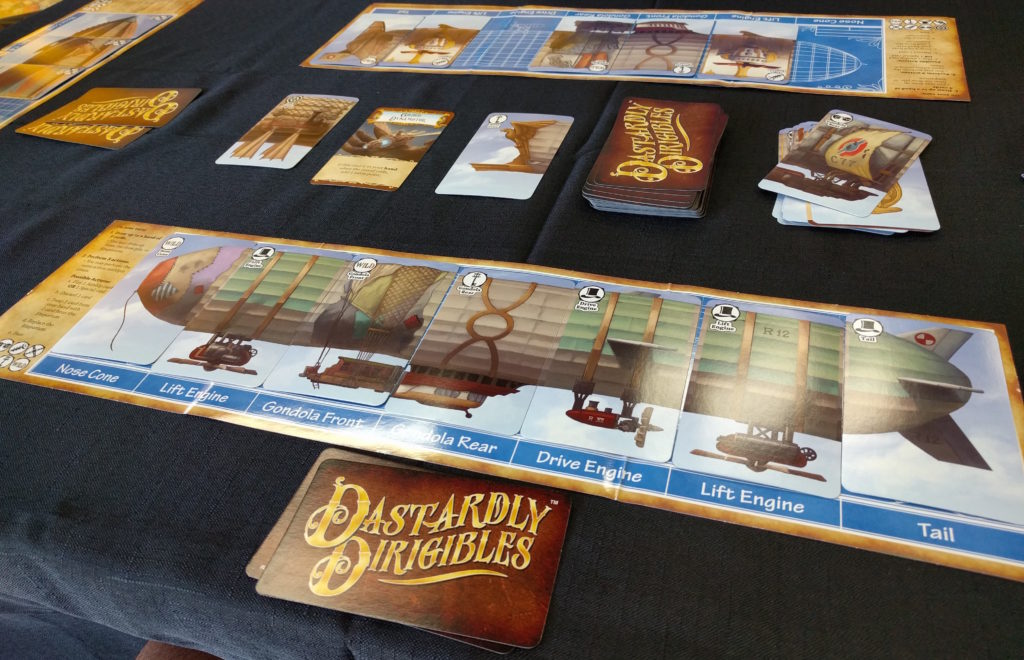 My gaming buddy Mike did a demo of Dastardly Dirigibles at 4 Color Fantasies in Rancho Cucamonga on Sunday. After I’d attended a picnic nearby, I stopped at the store to chat with Mike and his wife Cami. He gave me the rundown of the game and we all played one turn.

Dastardly Dirigibles is a steampunk-themed game and it was a breeze to learn: it’s a set collection card game, with a few special cards that can influence the action. The box says it’s a 60-minute game, but it seems like it could be faster after everyone’s learned the rules. Mike, his wife, and I played one turn in about 15 minutes and the game lasts for three turns.

Players are trying to build their own dirigible on their play mat to earn victory points. Each dirigible is made up of seven cards representing everything from the nose to the tail. Players start with five cards and before each of their turns they will draw up to their hand limit of five, either from the face-up stock of three cards (the Emporium) or the deck.

There are seven “suits” of cards, as indicated by familiar steampunk icons like a top hat, gear, etc., and one suit of wild cards. There are also special cards that are actions that can help you and/or hinder your opponents. For example, you can swap parts with another player or force others to discard some of their cards.

A player may perform up to 3 actions per turn and they may do the same action multiple times. The actions are:

What makes this game fun is the fact that every time a player plays a piece of their airship, any player that has that same piece (such as the nose cone) must play it onto their own play mat. This can mess with your plans of building the perfect blimp of all matching icons, which matters because you score points based on the most common suit in your ship. So, if 4 of my 7 pieces have the top hat icon, then I will score 2 points for each top hat (thus, 8 points in this case). Any wild cards are worth one point each and any other suits do not score. If you triggered the end of the round by completing your dirigible first, you also gain 2 points (and anyone else who completes their ship gets 1 point). After scoring, wipe the play mat clean, shuffle the cards, and repeat the process until three rounds have been played.

Dastardly Dirigibles has terrific artwork and an easy-to-learn rule set. I could play this with both newbies and seasoned gamers alike and I don’t think I’d hear any complaints.