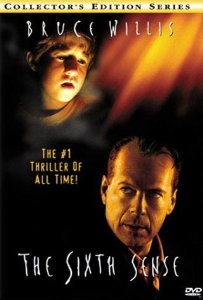 I wasn’t too sure about The Sixth Sense being one of AFI’s 100 Greatest Films. I loved it the first time I saw it and I remember enjoying it the second time as well. But for a movie that’s almost 15 years old, is it worth watching when you know its big secret?

Surprisingly, it holds up well. This was M. Night Shyamalan’s masterpiece. Like John Singleton and Boyz N the Hood, Shyamalan would not be able to duplicate the brilliance of his first film.

But what a first film it was! Haley Joel Osment is perfect throughout; even the now cliche “I see dead people” scene still brings chills. All of the supporting cast is solid (Bruce Willis,  Toni Collette, Mischa Barton, Donnie Wahlberg), but this is Osment’s movie and he nails it.

It’s been at least 10 years since I last watched The Sixth Sense. I’d forgotten how creepy it is; give me this type of ghost story over the typical slasher flick any day of the week. There are a few “gotcha” type scares, but mainly it’s the fear of the unknown. Is little Cole really seeing ghosts? Or is he losing his mind?

Like The Usual Suspects, The Sixth Sense is a masterly told tale that remains entertaining, even after its surprise ending is known.