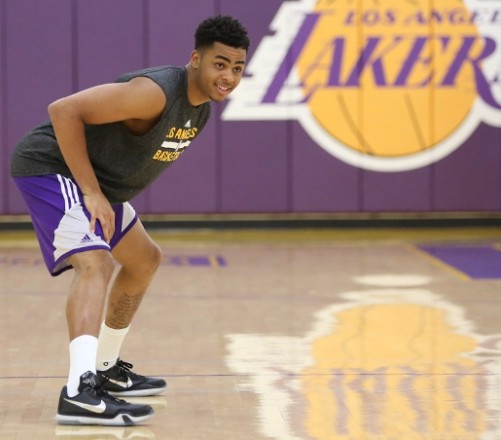 With how awful the Lakers have been the last two seasons (yes, I count a 45-win, first-round playoff exit as awful; Lakers fans are used to watching the team in June), they really couldn’t screw up the second overall pick in tonight’s draft. Most of us thought they were locked into Jahlil Okafor and given the franchise’s history with big men, it seemed a foregone conclusion. At the start of last season, I joked with my fantasy league that the Lakers’ motto for the year should be “Lose More for Okafor” (which eventually changed during the season to “Go Downs for Towns” and “Don’t Hustle for Russell”).

The Lakers surprised everyone and went with D’Angelo Russell, a 6-5 Ohio State point guard, who impressed the heck out of Kupchak. I like the pick. Even though Okafor should make an impact sooner than Russell, the newest Laker has the higher upside. It also doesn’t hurt that the Lakers have a young frontcourt player in Julius Randle, there are All-Star free agent big men available (Marc Gasol, Kevin Love, LaMarcus Aldridge, etc.), and there’s a still a chance that Boogie Cousins could don the Purple and Gold.

It’s the best I’ve felt as a Lakers fan since the last championship banner was raised (five years ago, which is an eternity for Angelenos) and as a sports fan, today was all I ask for: hope.