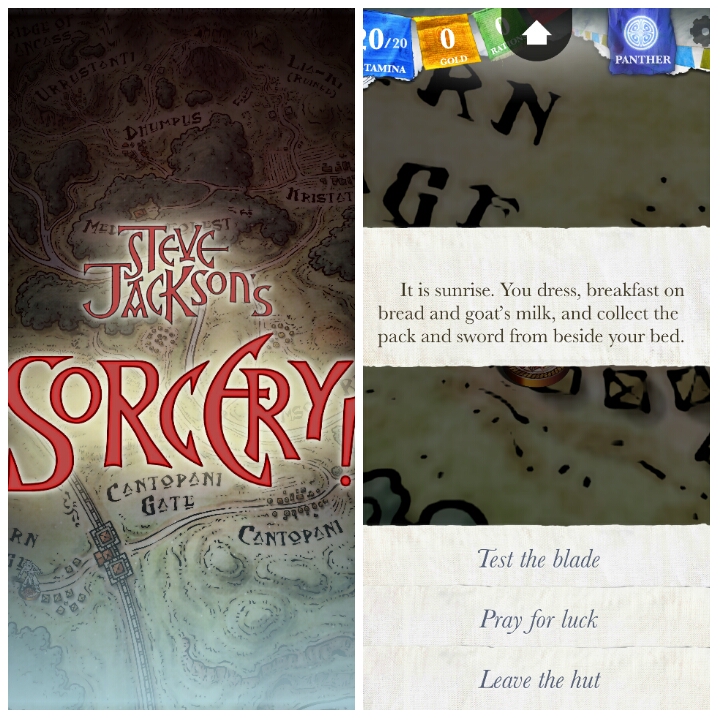 As a young teenager many moons ago, I loved Steve Jackson’s Sorcery!. This was a series of four books that was the prolific game designer’s take on Choose Your Own Adventure. After you read a page there were two or more choices that would take your story elsewhere. Choose one and go to the designated page to read the consequences of your action. Repeat until your story ended. It was a swords-and-sorcery tale, which appealed to my D&D-playing tastes at the time.

The best part of Sorcery! was the ability to learn spells and use them during your journey. There was a separate spell book that contained the spells and the codes for these spells. Every so often in your adventure, you would be given a choice of a few codes and had to pick one to cast the correct spell for the given situation.

I remember sitting in my local Vroman’s bookstore reading the spell book, trying to memorize the codes for the spells. It seemed like there were hundreds of spells, so after saving my allowance, I finally bought my own copy of the spell book, which made life much easier. I devoured the first two books of the series before my interest petered out. I bought the third book, but didn’t read it as much as the first two.

My waning interest coincided with my high school years and I’m not sure if I ever finished the third and fourth books. I’m sure they collected dust before being passed on to my brothers then Goodwill or the trash can.

I hadn’t thought about the books in quite some time, when last week I came across a website touting free Android games on Amazon. One was called Sorcery! and it sounded interesting, so I downloaded it to play later. Once the game was downloading I noticed Steve Jackson’s* name. I didn’t make the connection.

But once the title screen appeared, I nearly yelped out loud. I recognized that typeface and thought, No. Way.

I read the introduction and immediately recalled the familiar Shamutanti Hills setting.

It was the book I had spent so many hours as a youth reading and re-reading!

It’s been updated for today’s tech-savvy kids. The book is now an app with music, graphics, and a slick, user-friendly interface. Thankfully, it’s still the same wonderful fantasy story.

I have not geeked out on anything this hard in a while. Having Steve Jackson’s Sorcery! on my phone? My 1984 self would have been blown away.

*Update (9/16/15): All this time I thought that it was the well-known American game designer Steve Jackson. After I tweeted this post last night, the kind folks at Steve Jackson Games informed me that the Sorcery! author is actually a British game designer. My apologies for the mix-up.