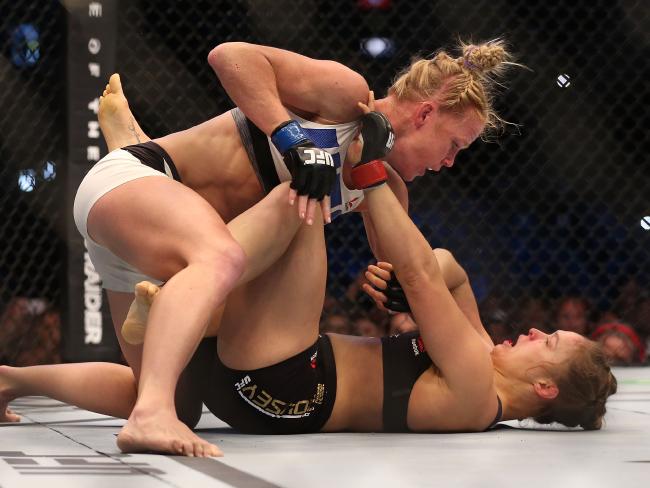 Tonight was one of the reasons why I love watching sports.

Tonight the sports world was shocked again, this time by Holly Holm. The former boxing champion was supposed to be UFC Bantamweight Champion Rhonda “Rowdy” Rousey’s latest victim, but like the other great fight upsets, she decided not to follow the script.

Holm fought the perfect fight. She used Rousey’s aggression against her. She fought from the outside, she used movement to frustrate Rousey, and she countered Rousey beautifully. The biggest moment was when Rousey got her hands on Holm and couldn’t use her infamous judo to throw her down and arm bar her. Holm easily defended Rousey’s one submission attempt on the ground.

In fact, it was Holm who was able to throw Rousey down on the mat. That was the beginning of the end. It was the first round that Rousey’s lost in her career and once she went to the corner, I knew it was over.

Rousey looked bewildered, but the first thing her corner said was that she was fighting beautifully. What?! I understand not wanting to panic your fighter, but shouldn’t they be telling her ways to counter the beating she was taking?

It probably wouldn’t have mattered. Just like Douglas and Serra on their nights, Holm wasn’t going to be denied. She continued to tag Rousey before unleashing a championship-winning head kick.

I couldn’t be happier for Holm, who became the first woman to win boxing and mixed martial arts titles. When’s the rematch?