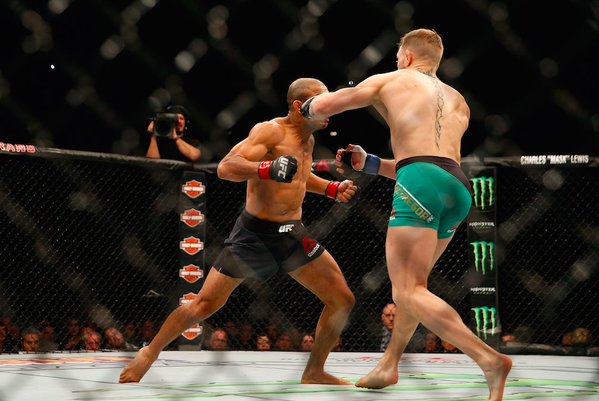 McGregor Gets There First.

I nearly missed the Aldo vs McGregor fight tonight. Not because I was busy or anything, but I happened to blink my eyes.

I’ve rooted for Aldo for so long that it was weird (sorta) rooting for McGregor tonight. McGregor talks a lot of trash, but he backs it up and the one thing I love about the UFC is that anything can happen.

In title-fight record time, McGregor knocked out Aldo cold in just 13 seconds. I thought the two would mix it up for two rounds before Aldo gassed (which is what seemed to happen to Weidman when he lost his belt to Rockhold in the fight before). But McGregor once again backed up what he said about nobody being able to take his left hand.

Aldo rushed in with his face wide open and paid the price as McGregor nailed him with that left just as Aldo was landing his own punch. Aldo was out while McGregor put the finishing touches (aka hammer fists) on him.

It reminded me of that old boxing adage: you want to be first. The Notorious One was first and cleaned out Aldo’s clock.