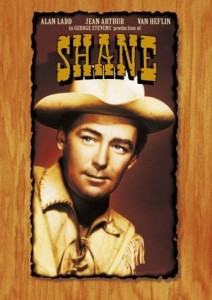 From the opening scene I wished I could’ve seen Shane on the big screen. Shot in Technicolor, the film looks gorgeous from beginning to end and wound up winning an Academy Award for Cinematography for its beautiful panoramic and lush views of Wyoming.

Aside from the cinematography, I liked Shane, but didn’t love it. Perhaps if I had seen it upon its initial release, I would’ve enjoyed it. But, over 50 years later, it didn’t pack the punch that I’m sure it had in 1950s. Alan Ladd is good as Shane, the handsome stranger who rides into town, trying to leave his gunslinging ways behind him. The star of the movie for me, though, was Van Hefln as Joe Starrett, the hard-working homesteader fighting for his family. How interesting it would have been had Ladd and Heflin swtiched parts. Also noteworthy was Jack Palance (credited as Walter Jack Palance), who was awesome as the gunslinger Wilson; he’s menacing and a strong presence whenever he’s given screen time

The character of Starrett’s son Little Joe nearly ruined the film for me. He’s an annoying kid in an Annakin-Skywalker-in-Episode-I kind of way. Other reviews I’ve read talk about Little Joe being the audience’s way into the story; he represents the fresh set of eyes for this straight-forward Western. I thought he was a whiny brat at times.

The action scenes were terrific. Given the period it was released in, I’m sure audiences were thrilled by Shane. For me, this was a solid Western, but one in which its age is beginning to show.