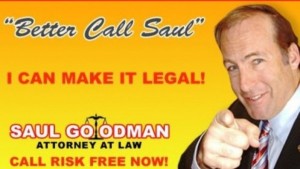 The much-anticipated premiere of Better Call Saul was this weekend and based on the reviews and social media reaction, it’s lived up to the hype. I thought the two-episode debut was solid and there were some nice tie-ins with Breaking Bad. It’s great seeing Saul in his pre-Goodman days as Jimmy McGill, a down-on-his-luck ambulance chaser. Like Walter White, we’re going to see one man’s transformation; unlike Walter White, we know exactly what Jimmy/Saul is going to become.

I have mixed feelings, though: not about the show itself, but of my viewing habits. Just like The Walking Dead (which also debuted the second half of season five this weekend), I like to get my television fix in two- or three-episode chunks instead of one-episode bites. Should I risk seeing spoilers on social media, just so I can stockpile a few episodes to watch in a few weeks?

It’s too bad that all shows can’t be released in a binge-friendly format like House of Cards.