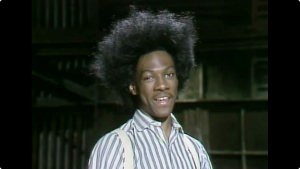 The Saturday Night Live 40th anniversary show is going on right now. Or is it? I recall hearing the start time as 7pm CST, but I’m in PST, so does that mean it started at 5pm?

During one of my first sleepovers in elementary school the highlight of the night was staying up late to watch SNL. I remember seeing Chevy Chase and Gilda Radner, but I don’t remember it being very funny. All of that grown-up humor was lost on me and my third-grade buddies.

A few years later, I absolutely loved Eddie Murphy. I had a VHS tape of my favorite sketches that my brothers, friends, and I would laugh at hysterically. My favorite sketch by far was “Buckwheat Has Been Shot,” with the Stevie Wonder-Frank Sinatra duet a close second (Joe Piscopo at his best). Even after repeated viewings, Eddie still cracked me up.

SNL has never been must-watch TV for me, though. During my 20s and 30s, Saturday night meant going out, not sitting in front of a television. I never set my VCR to record episodes. Yet somehow, through some sort of pop culture osmosis, I knew about the latest skits and catch-phrases, from “Isn’t that special?” to “More cowbell.” It’s comforting in a way, knowing that while I might not see it live, the skits will find a way into my life.