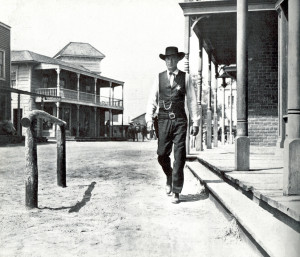 This was one of the movies that I watched as part of a Film Studies class a lifetime ago and still enjoy after several viewings. My exposure to black-and-white Westerns to that point had been the reruns on TV; nothing ever grabbed my attention enough to make me fall in love with the genre. High Noon was different, though, and it’s all because of Gary Cooper. He’s brilliant as Will Kane, the weary and soon-to-be retired marshall of a small town of weak-minded folk. Shot in near real-time, it’s an atypical Western, with Cooper as a vulnerable and very human hero of the film.

If there’s a weakness in this film, it’s the lack of action, but again it’s not your standard cowboy movie (the closing gunfight is great, though). Cooper is dressed in black, which was normally the bad guys’ color. Instead of rallying the town behind him, he finds himself alone, practically begging people to become deputies and make a stand against an incoming gang of bad guys looking for revenge. I love how Cooper maintains a stoic yet approachable presence throughout the film.

There’s a scene near the end when he seems overwhelmed by everything and he sets his head down to take a breather. It lasts only a few seconds, but it tells so much of the story: he knows he’s facing insurmountable odds and most likely a certain death and nobody has his back. I’m not sure most heroes of ’50s-era movies were shown in such a weak, powerless position.

Cooper’s vulnerability and his stand amongst the cowards of his town is what has always appealed to me. He’s not doing the popular thing, but he’s doing the right thing.

Other well-known actors in High Noon: Grace Kelly, Lloyd Bridges, and Harry Morgan (billed as Henry Morgan). All are good, but not as great as Cooper, who won the Oscar for Best Actor. And every time I see Lloyd Bridges in any old film, I blame Zucker-Abrahams-Zucker for making me think, “Looks like I picked the wrong week to stop …”