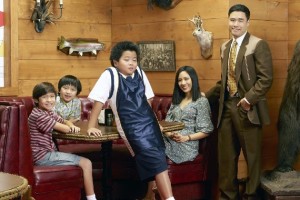 1. I missed last week’s Fresh Off The Boat due to a previous commitment, but tonight my wife and I weren’t going to miss our favorite television family. It was another hilarious episode, with so many highlights: Eddie suffering the indignity of having his neighbor babysit him as he goes overboard on the sriracha, Jessica’s quotes from Caddyshack, Louis’ Coming-to-America-like McDowell’s move, Eddie’s dream sequence, the billboard, and “Buffalo Things.”

2. The only complaint I have so far about the show? The entire season isn’t on Netflix so I can binge-watch to my heart’s content.

3. There’s a Spotify playlist of the show and there’s plenty from the Golden Age of hip hop. Listen here for your dose of 90s music (Warning: some NSFW language).

4. I know I said three things, so consider this a bonus: A must-watch after each episode is Fresh Off The Show, hosted by Phil Yu and Jenny Wang. It’s a live recap of the show and it’s funny and informative. Check their twitter accounts on Tuesdays for the link to the live feed on youtube.