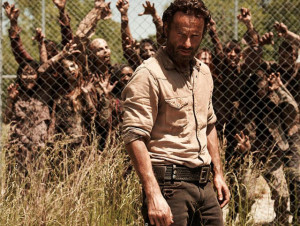 The Walking Dead on AMC.

As far as horror sub-genres go, zombies are probably last on my list, next to lovestruck teenage vampires. I always found zombies to be boring. Gross, yes. Fascinating? Exciting? Cool? No, no, and no. I liked the original Night of the Living Dead, but all of the other classic Romero films did nothing for me.

In fact, my most memorable zombie movie moment had nothing to do with the actual film itself (the remake of Dawn of the Dead). I was living in Santa Barbara at the time and my roommates and I went to see the Sunday matinee showing. About 20 minutes into the movie, a drunk guy walked in and started harassing the people in front of him. Words were exchanged, then fists were flying. The film was stopped, the drunk guy was tossed out, and order was restored. I remember laughing with my roommates and recalling how people freaked out years earlier when Boyz N the Hood opened, thinking gang violence would mar the film’s opening weekend, especially in urban areas. Obviously, those worries turned out to be for naught, since the real troublemakers came out on lazy Sunday afternoons in tourist towns.

It wasn’t until two weeks ago that I became a zombie fan. My wife and I don’t watch much TV, except for the local news and Jeopardy. However, we are notorious Netflix binge-watchers and after Breaking Bad, House of Cards, and Orange is the New Black (she finished it, while I ended up re-watching The Wire), we finally gave The Walking Dead a shot. We’d heard a lot of good things about the series, but I wondered how each of us would react, given my indifference to the genre and her preference for rom-com and feel-good movies.

The Walking Dead has been excellent. We’re finishing season three soon and we’re both surprised how much we’ve enjoyed it so far. It’s another reminder that we’re living in a golden age of television since another generic zombie film wouldn’t have made me care, but the long format of a television series suits the source material well. Watching these characters evolve from one season to the next, as the story has moved from surviving the apocalypse to rebuilding communities, has been utterly fascinating and engrossing.

Now that I think about it, I’ve probably overstated my indifference to the zombie genre. The Edgar Wright film Shaun of the Dead is something I can always sit through if I find it while flipping through channels. Dead Trigger was a game that I played constantly on my wife’s Nexus 7; the second she finished pinning things on her Pinterest account, I grabbed the tablet and started blast thousands of zombies.

So, upon further review, I’m bumping up the zombie genre in my rankings of horror sub-genres. And I’ll be watching every episode of The Walking Dead from the comfort of my bedroom: it’s much safer than a Sunday matinee in Santa Barbara.