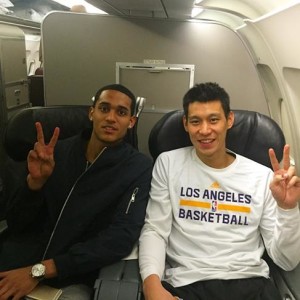 I had just posted how happy I was to see more and more Filipino Americans and Asian Americans in the news, when history was made: my beloved Los Angeles Lakers starting backcourt was Jordan Clarkson and Jeremy Lin. Although these two will never be confused with Magic and Scott or Kobe and Fisher, it was A Moment due to the fact that they were the first Asian American starting backcourt in NBA history.

Lin is a Chinese American and well-known for Linsanity, the two weeks where he absolutely ruled New York and the sports world. It was the feel-good story of the year, not only for Asian Americans, but for sports geeks like myself.

Clarkson is a Filipino American who joined the Lakers this year and after stints in the Development League, made it to the big team.

Confession: I did not actually watch the game, something I could not have said just two years ago. Since the Lakers bungled the Dwight Howard signing, I’ve lost interest in my team, due to mismanagement (primarily in ownership; yes, that means Jim Buss) and a lack of talent. I support the team, obviously, but after watching a lifetime of games where the Lakers were contenders (if not for the title, then at least a solid playoff team), it’s tough to get excited about a team that has no shot of doing well in the postseason, let alone actually qualifying for it.

Still, the moment was not lost on me and it wasn’t lost on Lin, either. That’s his Instagram photo above, which he captioned with a note about the history he and Clarkson made. Here’s hoping they can somehow drag the Lakers back to respectability next year.