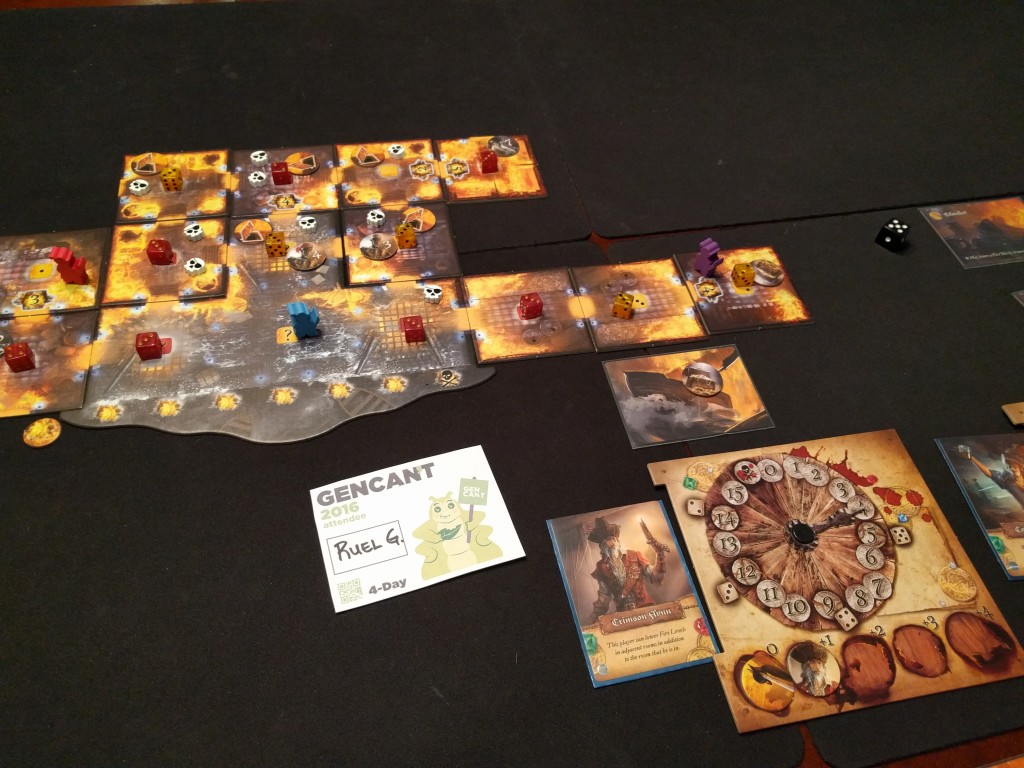 A mellow Day 2 of GenCant for me last night: watched the Olympic Opening Ceremonies and played one board game.

Back in April I played Dead Men Tell No Tales with my weekly gaming group. I’d never heard of it before, but the box cover art was gorgeous and since I like cooperative games, I was interested. The guy who brought it had just received it from Amazon, so we opened it up and jumped right in.

I loved the theme: you and your fellow pirates have conquered the Skelit’s Revenge, a burning ship full of treasures to be looted before it sinks. Of course, nothing says pirates like having to defeat guards to gain the treasures or battle one of the many undead skeleton crew or deckhands trying to stop your crew.

Dead Men Tell No Tales is a mix of Flash Point and Pandemic and it’s much tougher than both. In addition to making the best use of your actions every turn, you have to keep an eye on all of the hot spots on the ship or else a room will blow up and be inaccessible for the rest of the game. I loved the combat against the skeletons and guards; it’s something that sets it apart from other co-ops (it’s easier than Dead of Winter’s combat, though).

Our group quickly found out how tough DMTNT was; before we knew it, we’d reached the maximum number of explosions and our game was done.

So, thanks to a screw-up by Amazon, my gaming buddy’s copy was one of two that he’d received. Amazon told him to just keep the second one free of charge so after we were done he asked if anyone wanted to buy it for $20, which would pay for half of his copy.

I’m a sucker for a good deal and couldn’t resist a 50-percent-off copy of a game that’d just been played once. Just like that, I had my very own DMTNT.

Last night I solo-played it on the Scurvy Dog (easiest) level with three characters. This was my fourth time playing it solo, but the first since April so I was pretty rusty with the rules. I had to stop a few times to consult the rulebook and even reviewed the notes I’d taken after I’d played it the first few times. More than once I had to re-trace my steps to correct improper moves.

I’d never beaten the game and as things started getting hectic, I found myself re-living those previous losses. Would I have enough deckhands left? (Like Pandemic, if you go to the supply and can’t put any out on the board, you lose.) Or would I suffer from too many explosions, which is how most of my other solo games ended?

Thankfully, neither happened and I won right after I pulled the last tile for the ship.

Even if I’d lost, I’d still feel that DMTNT is an underrated cooperative game that doesn’t get the recognition it deserves. Copies aren’t as easy to track down as Pandemic or Flash Point, but it’s well worth the effort.