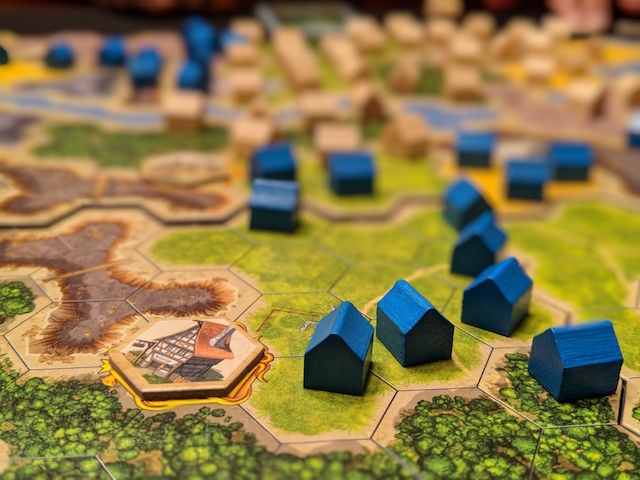 I couldn’t fall asleep Wednesday night so I started reading my Twitter feed when I came across a link to an Amazon deal. It was for Kingdom Builder, an abstract game that I’d first played over a year ago. I remembered liking it then and for less than $9, I couldn’t resist. I bought it then fell asleep about an hour later.

When I woke up it felt like a dream. Did I really buy a Spiel des Jahres winner for less than the cost of a meal? I re-checked my account and, sure enough, it was already on its way.

Today it showed up at the front door and after punching out the bits and reviewing the rules, I was ready to play. But first, dinner with my wife at our favorite local Thai restaurant. When we got home I wanted to see if the game was as good as I remembered.

Kingdom Builder is a terrific gateway game, with excellent components and an easy-to-learn ruleset. Players are trying to build the most valuable kingdom by laying settlements throughout the land. The simple turns make for a quick game: draw a card that determines your placement, then do any additional actions you’ve unlocked during the game.

It’s not a brain burner, but it does force you to plan carefully, especially during your first few moves. Thanks to its handful of different scoring rules and extra interlocking game board pieces, there’s a lot of variability since you won’t be trying to score in the same way and the board will be different each time.

This was Donald X. Vaccarino’s follow-up to Dominion and while Kingdom Builder didn’t set the gaming world on fire like Dominion, it’s still worthy of being on any gamer’s shelf. Especially when its price is a single digit.