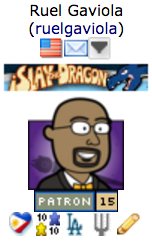 I completed my first 10×10 Challenge last month and today I received a microbadge for my boardgamegeek.com profile. After checking my stats I learned that I’ve played 16 different games 10 times each this year. Not a bad year so far!

Gamers often talk about the Cult of the New; that is, the desire of gamers to play the newest games. When you’ve been in the hobby for a while, the latest shiny thing will be that much more attractive than your shabby, well-worn copy of Catan or whatever gateway game is taking up space on your shelf.

I enjoy learning new games, but it often takes me two or more plays to grasp a game’s mechanisms, strategy, and nuances before I decide whether or not I like it. I just get a better feel for a game as a whole after multiple plays and I should know by then if I want to add it to my personal library.

I’m fortunate to belong to two gaming groups with various tastes; in one group I’ll find well-established games and some lesser-known or under-played titles while my second group has a new game or two nearly every week. Thankfully, both groups are accommodating; first, if there’s ever a game that can only be played by a certain number of players, we won’t play it if it means someone must sit out. I’ve always appreciated this because nobody is ever left out, which could’ve happened a lot whenever there were five of us at the table and someone wants to play something that only handles four players. Second, everyone must agree to play the proposed game. Again, people are accommodating and most are willing to try games that are unfamiliar to them. If we have enough players, we’ll split into two or more groups so that everyone can play something to their liking.

Games aren’t repeated from week to week too often, but whenever they are, I usually jump at the chance to play them again for the reasons listed above. And it’s helped me earn my first microbadge for the 10×10 Challenge.