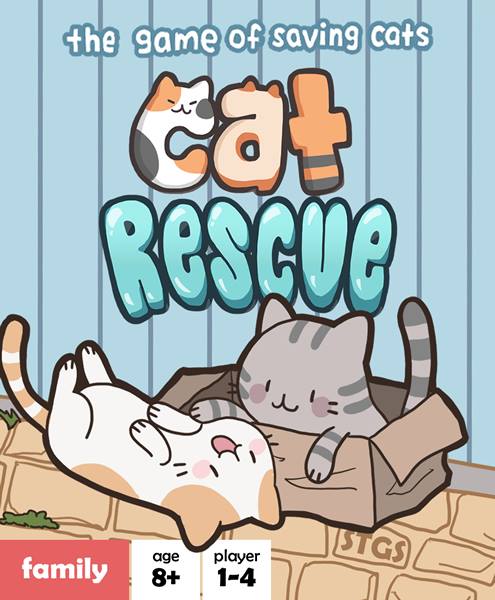 Ta-Te Wu seems to be designing games all the time. Just a few months after his Kung Pao Chicken was published, he’s back with Cat Rescue, his latest micro game seeking funding on Kickstarter.

Cat Rescue is a cooperative game about saving and adopting cats. The game consists of 26 cat cards, 1 double-sided delivery card, and four shelter tokens. The tokens are used to mark the corners of the shelter, which is a 4×4 playing field.

By maneuvering the cats on their turn, players will get them ready for adoption and ultimately get them out of the shelter to score points. The more points scored, the better your final ranking.

After four random cats are dealt to the center of the playing field, two cats are dealt to each player. These represent the player’s foster home. The delivery card is placed on a cat and indicates the direction that cats cannot be moved in the shelter.

At the end of the game, score two points for every adopted cat and one point for every ready-to-adopt cat (that is, those cats flipped facedown but still in the shelter). A scoring chart will rank your effort from “Cat Got Your Tongue?” to “You’re the Cat’s Meow!” 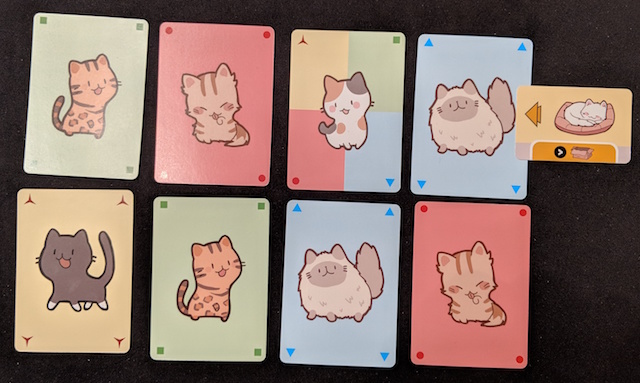 Cat Rescue is a fun puzzle game highlighted by its super cute art done by artist Kaiami. The game features a simple turn (take a cat from the deck or from your foster home and place it in the shelter) and the trick is figuring out where to place your cat. You’re trying to get similar cats together so you can flip the middle one(s) over for adoption, so playing a wild cat early can help you out as you get later cats next to them. As you build up facedown cats ready for adoption, you’ll start pushing them out of the shelter to score points.

Like other cooperative games, there can be an Alpha Gamer problem where one person takes over the game and tells others what they should do on their turn. The game works best when players can work together to find solutions, but quarterbacking can happen. It’s probably why I prefer playing Cat Rescue as a quick and quiet 15-minute solo puzzle.

One final observation: while marking the 4×4 grid with the included shelter tokens (cubes) is fine, this game screams for a playmat. It’d be easier to keep track of the shelter’s borders this way; hopefully, a BGGer with spare time will make a playmat or Kaiami herself will offer a playmat featuring her artwork (fingers crossed).

Thanks to Ta-Te Wu for providing a copy of Cat Rescue for review. Cat Rescue is currently funding on Kickstarter. The campaign runs until Thursday, April 19th.