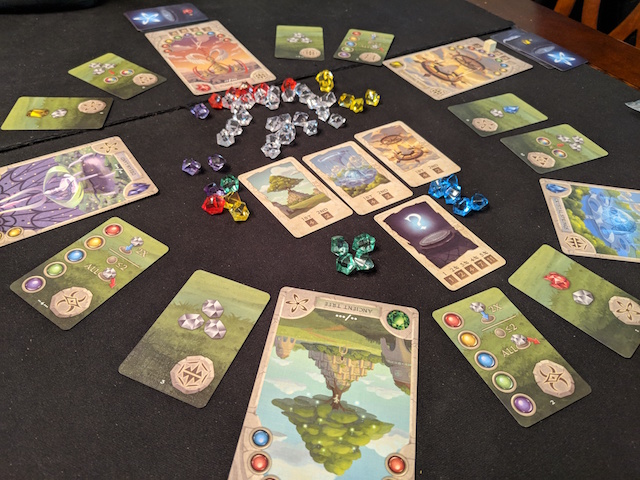 In the world of modern board gaming, bigger does not mean better. From Gryphon Games’ Bookshelf games to the small-box brilliance of the Tiny Epic series, games no longer need to be in Days of Wonder-sized boxes to provide a satisfying tabletop experience.

Mystery of the Temples from Deep Water Games is the latest game to outplay its humble size. Players are adventurers exploring wilderness, gathering crystals, and trying to break the curses placed on various temples.

The game features excellent components with linen-finished mini-Euro-sized cards and tarot-sized cards, 60 crystals in five colors, four meeples, and 24 broken curse marker cubes. I was surprised by how many things were packed into the box; it was easy to find and set up everything.

The object of the game is to score the most points by breaking curses, collecting runes, and gaining end-game bonuses via area majority and set collection.

For the most part, you’ll move on the wilderness cards to collect crystals before moving onto the temple cards to break curses.

As you gather crystals, you’ll store them on your crystal grid. You’ll want to pay attention as you do this since the order in which you place them matters. Why? Because to break a temple’s curse, you must play the crystals in the exact order shown on the card. So if you want to break the yellow-yellow-blue curse for three points, those crystals must be connected to each other on your crystal grid. 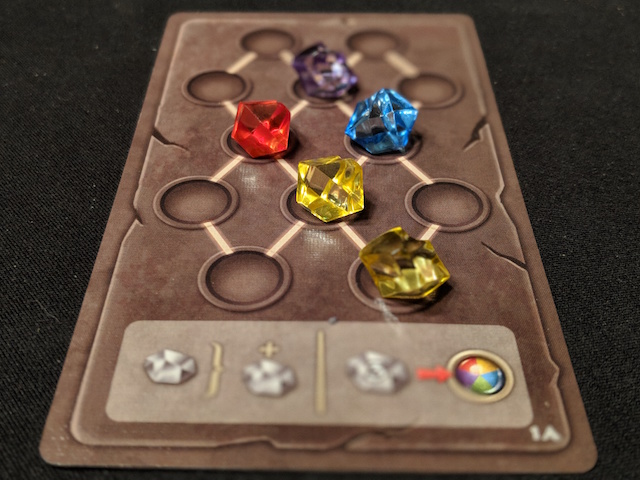 Once you break a curse you’ll score victory points and gain a rune card. These cards offer special abilities and additional crystals whenever you land on a card that has the matching rune. As the game progresses, multiple rune cards may be trigger simultaneously.

After a player breaks five curses, then the rest of the round is played. Players then check for end game bonuses. First, three of the five temples offer bonuses points based on who has the most broken curse markers on them. Next, players check their rune cards and gain points based on the number of unique runes they’ve acquired. The player with the most points wins. 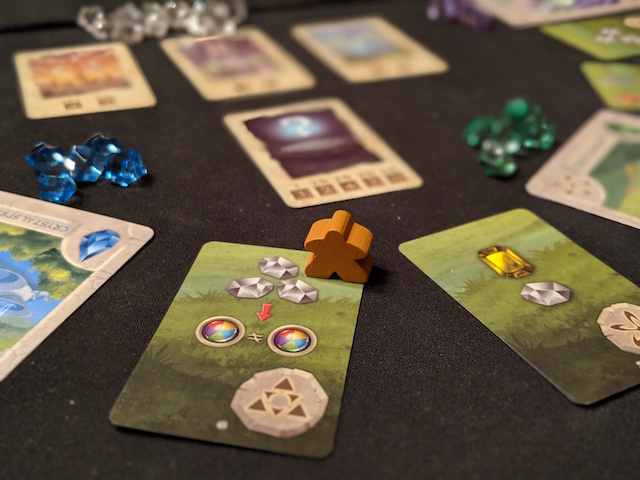 I was impressed upon seeing the quality of components inside Mystery of the Temples and was equally impressed by its game play. The turns are simple (move your meeple and either collect crystals or break a temple’s curse), but there are decisions to be made throughout the game.

Since players can’t share spaces (they leapfrog any player on a card), not everything you attempt will go according to plan. You can even block an opponent from a temple by landing on it before they do and it’s not uncommon to find another player beating you to a temple.

The crystal grid makes things interesting by forcing you to be aware of how you store your crystals. I like that you can’t just hoard crystals; you can only keep a dozen and if they’re not in the right order to break a curse, then you’ll have to spend clear crystals to re-arrange them.

I also liked the asymmetry built into the game; each player has a special ability they may use on their turn. These abilities may shape your early strategy and it’s a nice way to ensure everybody isn’t trying to land on the same cards in the opening rounds.

Don’t let the size of Mystery of the Temples fool you: the box may scream “filler,” but the game has enough meat on its bones to satisfy hobby gamers. 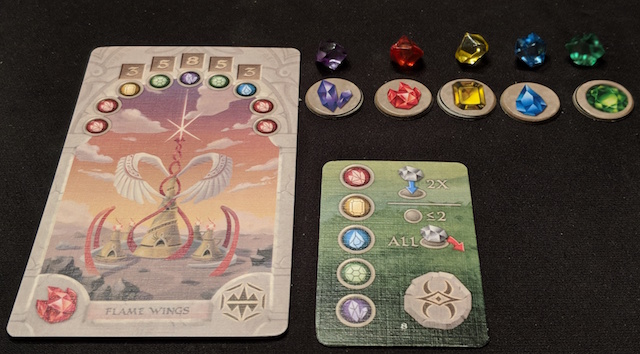 A note on color blind accessibility: if you follow me on Twitter, you know I’m an advocate for making games more accessible for color blind players. When Deep Water Games contacted me, they said they were updating the original game to be color-blind friendly, which was an absolute godsend.

The temple cards and wilderness cards have been replaced by cards with unique icons for each color. And instead of using different-colored crystals, you can use the included tokens with those same icons on them.

Kudos to Deep Water Games for making Mystery of the Temples color-blind friendly. I hope more publishers follow their lead in thinking about accessibility.