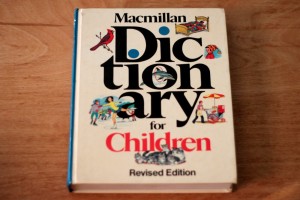 When I was a kid, mom made me read the dictionary. Actually, “encouraged” is a better word, since she didn’t force me to do it. So I would crack open my Macmillan children’s dictionary and skim the words until I found one I didn’t know. The Macmillan was great, since it had plenty of pictures and drawings among the definitions.

Eventually I perused the Oxford English Dictionary a few times during my college days. The main library had a copy of the OED and it was exciting and intimidating, overwhelming and intriguing. Even though I was an English major, I was never required to use the OED for any of my assignments, but its reputation preceded it: I was pulled in by its mystique, since the OED made word nerds jump and down in its presence like apes going ga-ga over a monolith.

Years later, I would read about Ammon Shea’s quest to read the OED from beginning to end, in his delightful book, “Reading the OED: One Man, One Year, 21,730 Pages.” As crazy as the idea sounds, it appealed to me. I’ve always loved libraries and, although I have no desire to read the OED cover to cover, I can relate to the solitary quest of reading.

Today, I have a few dictionaries on my home bookshelves, but they don’t get nearly enough use. However, I do follow the OED’s Twitter account. Every day they tweet a word’s definition (usually an obscure one) and while it might not bring back the childhood pleasure of learning what an aardvark is and seeing its picture next to the definition, it’s nice to have a little knowledge break among the usual social media noise.