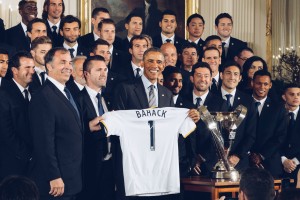 Two days ago the Los Angeles Galaxy visited the White House, where President Barack Obama honored my favorite soccer team for their 2014 MLS Cup win. It’s the third time in four years that the Galaxy have been to Washington, D.C.

My wife and I were at the Home Depot Center in December when the Galaxy defeated the New England Revolution to claim the Cup. We sat with the Angel City Brigade supporter group and were part of the passionate Section 121. It was a great day, watching legend Landon Donovan end his professional career with another title.

Of course, being at an L.A. sporting event means I can enjoy my beloved post-game bacon-wrapped hot dog. It’s not as exciting as meeting the President, but it’s a fine way to celebrate a championship. 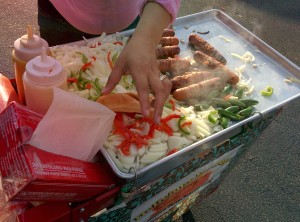 Typical scene after an L.A. game.