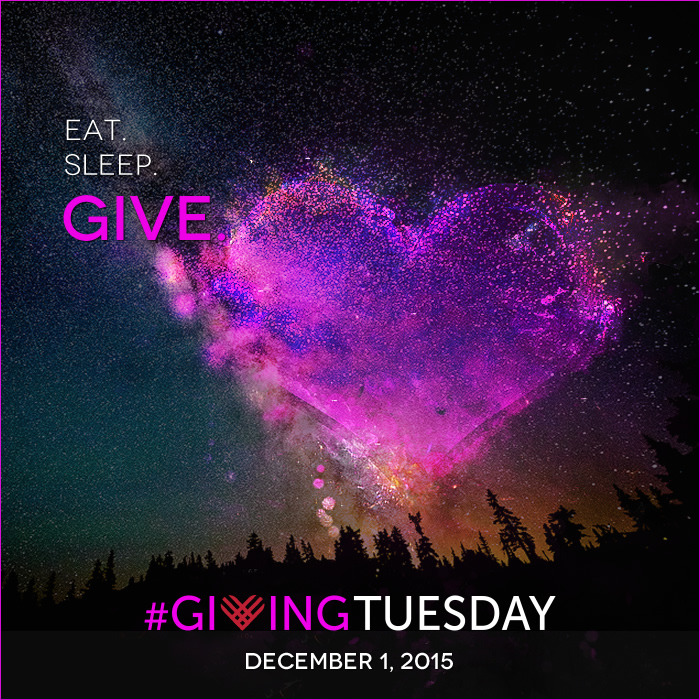 While I’ve shunned Black Friday over the years and slowly become more of a Cyber Monday kinda guy, Giving Tuesday is really the only day that matters.

Started four years ago, “#GivingTuesday is a global day of giving fueled by the power of social media and collaboration. Observed on the Tuesday following Thanksgiving (in the U.S.) and the widely recognized shopping events Black Friday and Cyber Monday, #GivingTuesday kicks off the charitable season, when many focus on their holiday and end-of-year giving.”

My wife and I have supported Wikipedia and CicLAvia on previous Giving Tuesdays. This year, we donated to a cause very close to our hearts: Visual Communications.

Visual Communications “is the first non-profit organization in the nation dedicated to the honest and accurate portrayals of the Asian Pacific American peoples, communities and heritage through the media arts.”

It felt good to make a small donation tonight. And unlike Black Friday and Cyber Monday, Giving Tuesday is the only pseudo-holiday that can be practiced on any day of the year, so if you’re reading this days, weeks, or months from now, you can still participate. 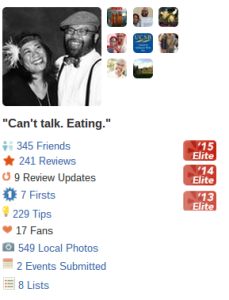 Pictured above is part of my Yelp profile. Just two days ago, I wrote about my love of Yelp, how I’d started a Write-100-Reviews-in-a-Year challenge, and my desire to score my 2015 Yelp Elite Badge. Well, the badge showed up on my profile today!

I wear my Elite badge proudly. Okay, I virtually wear it proudly. Still, I like being held to a higher standard and being a Yelp ambassador. My friends and family know how much my wife and I love using the site and we always get a kick out of sharing Yelp-related stories.

One of my favorite Yelpish stories happened last spring. A buddy checked-in to his storage space (for those not familiar with Yelp-ese, users “check-in” to businesses via the phone app). He posted two photos from his storage unit of his-and-her beach cruisers with a caption that read, “For Sale.” A few messages and two hours later, my wife and I were proud owners of two almost-new beach cruisers and we rode in our first CicLAvia the next week.

We were blown away by CicLAvia, an open-streets event in Los Angeles inspired by the original Ciclovia in 1976. The city shuts down a few miles of streets and bicyclists, skateboarders, runners, and walkers (and the occasional unicyclist) are the only ones granted access for most of the day. It’s an amazing, inspirational, and transformative event, with plenty of smiles and laughs from everyone involved. For someone who hasn’t ridden a bike in over 20 years, it was a few hours of pure joy. Our first CicLAvia was along Wilshire Boulevard and it was strange not seeing a single car on this well-traveled street through Koreatown and beyond; we likened it to riding on the biggest and coolest bike path ever.

Of course, I reviewed CicLAvia for Yelp, rating it five stars. If I could, I would’ve given it an additional five stars, thanks to the great deal on my bikes the week before.

Below: In less than a year, our bikes have traveled throughout L.A. We got a kick out of parking them next to the motorcycles in front of Urth Caffe in L.A. before the October 2014 CicLAvia. 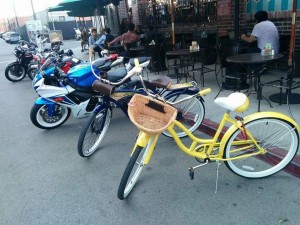