Another fun dive into the second side of the Clank! Sunken Treasures expansion. Check out the replay of our live stream below. And don’t forget to join us every Tuesday at 1pm PST for Renegade Game Studios’ Clank! League.

From yesterday’s live stream at Renegade Game Studios: Will Victor and I beat Gary in Clank!? Or will Gary repeat as the Week 1 champion? Watch below to find out!

Started the Renegade Game Studios’ Clank League with Victor and Gary. So much fun! 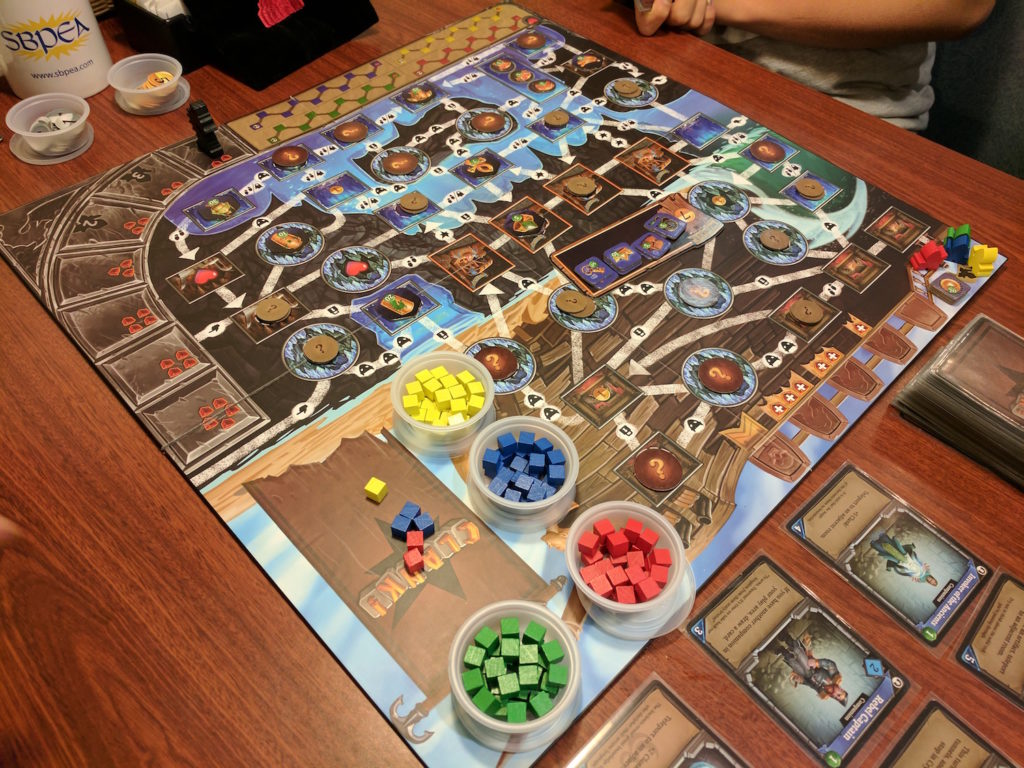 Technically, my Every Night Is Game Night: My Daily Play & Blog Challenge is over, but I missed a few days so I’m writing about other games I played during May. This is post no. 28, so I’ll write three more and consider my quest completed. What are you playing these days? Tweet me and let me know!

My buddy Daryl loves deck builders and when he bought Clank! I was curious to see what all the fuss was about. After two games, I knew it would be a fine addition to any game library.

While the theme to Clank! is a well-worn one (adventurers going into a dungeon to grab treasures while avoiding a dragon), the deck-building mechanism used for combat, movement, and more is a fresh take on the genre. You know the drill: each player draws five cards from their deck and uses the money to buy additional cards from a general supply. There are also combat symbols so you can fight monsters and movement symbols that allow you to explore the dungeon.

The fun happens when it’s time to see who’s been burned by the dragon. Whenever a “clank” happens, you add your colored cubes into a bag. When a card with a dragon icon is revealed in the general supply, then it’s time to reach into the bag and randomly pull out cubes. Each cube of your color that’s pulled means you take one point of damage.

Finally, I loved how the push-your-luck mechanism was used in Clank! Once you’ve grabbed your treasure, you may race back up to the surface for bonus points and safe haven from the dragon. It’s a blast watching your opponents scramble through the dungeon as the dragon’s attacks become more frequent and more damaging. Evil laughs abound during this part of the end game. Muahahahaha.

At my Thursday night gaming group I played the Clank! expansion, Sunken Treasures. While I enjoyed it, there wasn’t much new to the base game. There’s an additional push-your-luck element with the scuba gear and diving into the water for more treasure; you can still go underwater without the gear, but you’ll have to come up for air (go to any non-water space). A nice touch, as were the new cards, but nothing totally game-changing about it.

Sunken Treasures isn’t a must-have expansion that improves the game significantly or adds new layers of depth (like Tuscany did for Viticulture), but Clank! fans should enjoy it. I did.