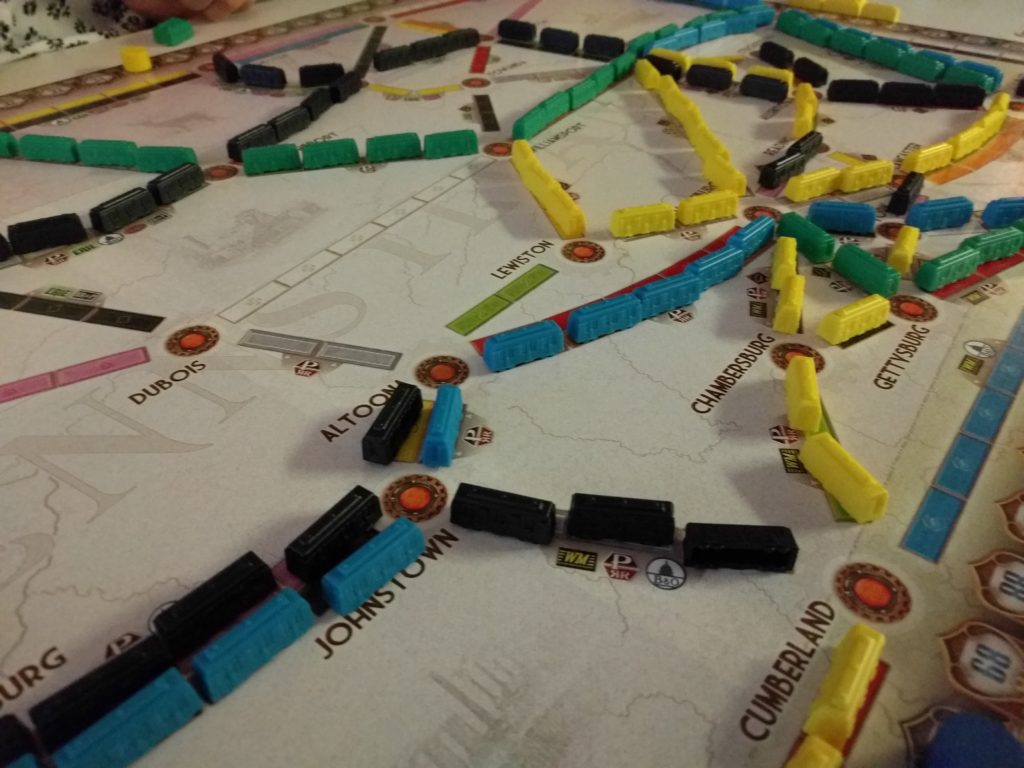 Ticket to Ride is my go-to gateway game for new players. It’s easy to teach, it has excellent components, and it takes less than an hour to play. The word “elegant” is always mentioned whenever somebody writes about TTR and it’s an apt description. Players have a choice of three actions every turn: draw train cards, lay down trains onto the board, or draw destination tickets.

Play moves quickly, but there are interesting decisions to be made. Do you lay down your trains to claim a route before an opponent does? Or do you draw more train cards in hopes of completing a longer, more valuable route? Do you take a chance and try to draw a more valuable (and more difficult) destination?

When my wife and I first played TTR, we were like many new players, content to finish our original destination tickets without much thought of anything else. After repeated plays, we were soon connecting routes in an attempt to win the longest route bonus while also drawing plenty of destination tickets that were already completed or nearly finished.

We hadn’t played the original in a while, but we played Ticket to Ride: Pennsylvania at my buddy Patrick’s birthday party this weekend. I’d had a chance to try it at my gaming group a few months ago and knew that my wife would enjoy it as much as I did. The game play is exactly like the original, but there’s one intriguing addition: stocks.

Most of the routes on TTR:P have stock icons on them. After a player claims a route, they have the option of picking one of the stocks on that route and they receive its card. At the end of the game players receive bonus points based on the amount of stocks they own.

It’s a simple and brilliant addition to the game that opens up game play immensely. Players can still focus on building the longest route or completing destination tickets, but they can also try to gain as many stocks as possible. If a player is blocked from completing a destination, they can build elsewhere in hopes of getting the most shares of a stock, which can make up the difference from the failed destination.

I love how it adds so many options while keeping the game play, ahem, elegant. At the party we played a four-player game in less than an hour (we were all familiar with the original, though, so it was easy to jump right in). It’s a must-have for TTR fans who want to inject life into their well-worn copy.