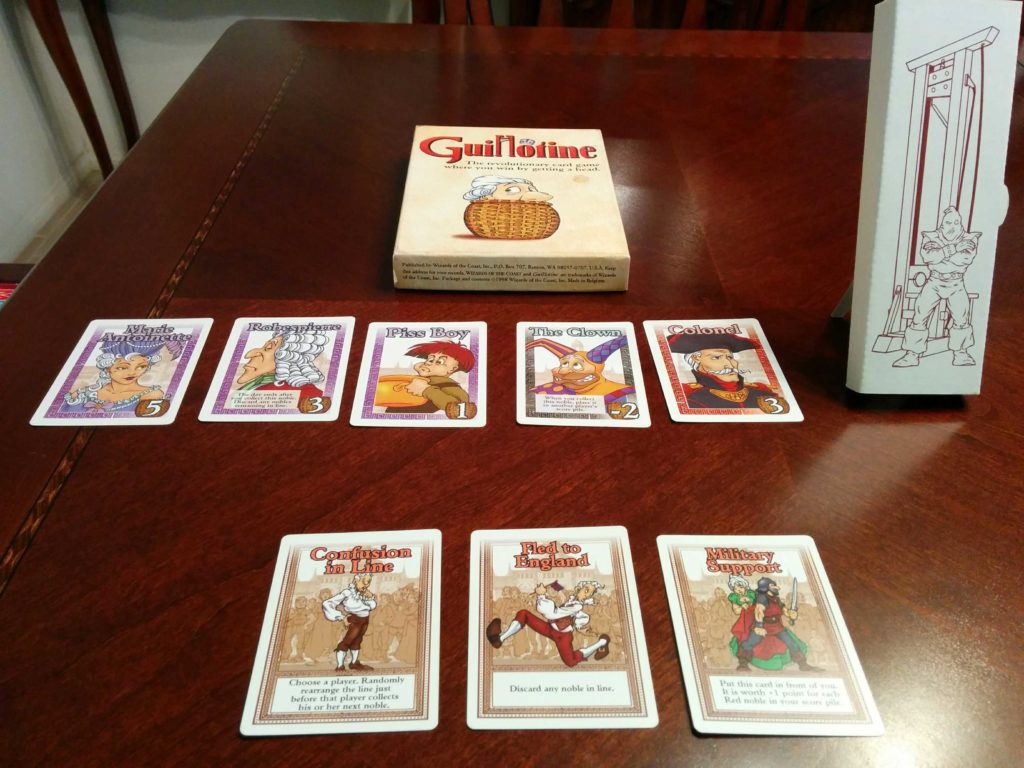 In spite of its gruesome premise — nobles lined up to get their heads chopped off — Guillotine manages to be a fun filler game, with stellar Disney-esque artwork. Set during the French Revolution, players are trying to collect the best-scoring heads at the guillotine.

The game is played over three rounds. Each round there is a row of seven nobles lined up ready to meet The Executioner.

During their turn, a player:

When there there are no more nobles in line, the round is over. Seven more nobles are dealt out in a row and the next round begins.

(One interesting note: game designer Paul Peterson once said of the Callous Guards card, “That’s the biggest mistake I ever made as a game designer in my life.” Basically, it stops other action cards from affecting the line and Peterson recommended taking it out of the game. “That card taught me a lesson: Don’t stop players from playing the game.” While I can’t get myself to throw it away, I never include it during play.)

Way back in the late 90s, I worked with a guy named Angus who was a huge RPG fan. Although I never got to play D&D or any of the dozens of games he played, he did introduce me to this nifty little card game and many of our lunch breaks were spent playing Guillotine. Angus was the best to play it with; he’d make hilarious comments in French accents for the characters and we’d laugh ourselves silly.

While I don’t miss that particular job, I do miss gaming with my buddy. We live too far away now to do so, but I think about him and his boisterous laugh whenever I bust out my well-worn copy of Guillotine.