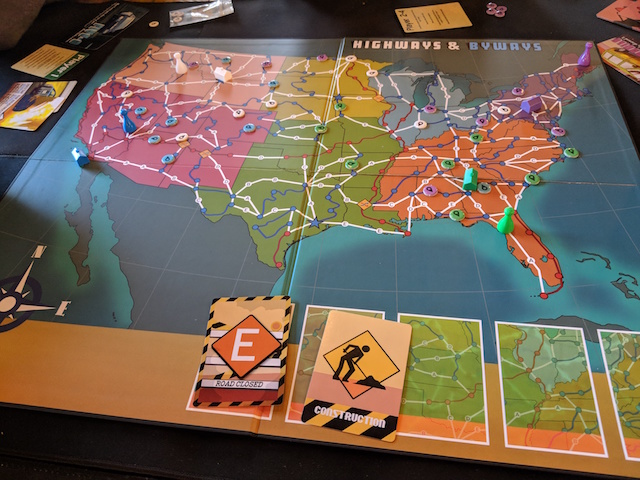 In Highways & Byways, you and your opponents have scored your first used cars and take to the road to explore America. You each start at a home base and have a set of routes you’re trying to complete and return home. Whoever does this first, wins.

The highlight of the game is the Driving Phase, where players are allowed to move up to six times on their turn. This is more than enough to complete your routes, but thanks to the random Construction and Event cards played before each turn, you may have to do some maneuvering around blocked paths or take a different route altogether.

Along with the point-to-point movement mechanism, there’s also the hand management aspect of Event cards. Each player has a hand of five Events and one is chosen randomly before their turn. A bad Event hinders movement while a good Event can help you overcome obstacles on your route. If you’re ever short on movement, you can discard one Event card to gain one movement action; it’s also a good way to get rid of those bad Events from your hand.

Each player also has their own special ability, which can make their travels go a lot smoother by ignoring some events, drawing extra Event cards, and so forth. 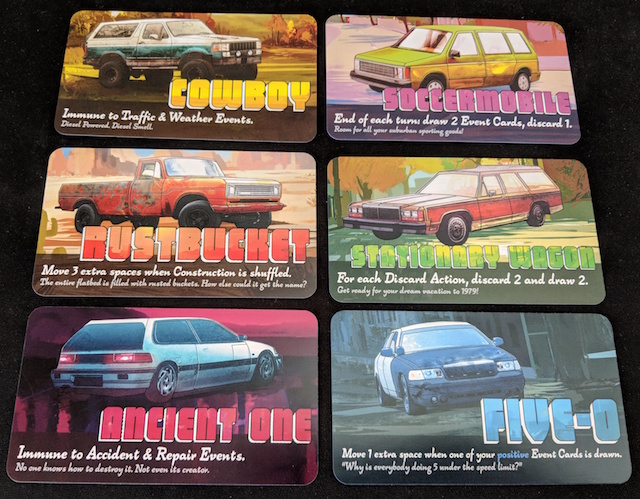 The first player draws two cards from the deck, keeps one, then passes one to the next player. That player then draws one from the deck, chooses which one to keep, then passes the other to the following player, etc. This is done a total of 12 times and while I understand that players work on their Driving Stage strategy during this stage, it felt like an interminable wait before you could select your card. 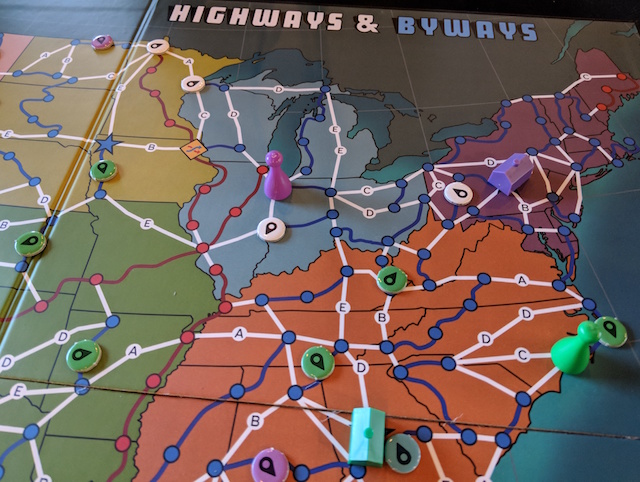 (Note: Since I was given an early prototype of the game, I shared my thoughts regarding the Driving Stage. Developer and publisher Brandon Rollins said that he may be adding a Planning Stage variant that would consist of each player drawing 14 route cards and simply discarding two of them. This is a welcome change and I hope he makes it an official variant during the Kickstarter campaign. Speaking of Rollins, he shares a lot of his game design process and thoughts on his website. If you’re an aspiring game designer, you should check out his site or follow one of his social media accounts.)

Overall, Highways & Byways offers a gateway-style experience during the Driving Stage and I’d like to see what, if any, tweaks are made to the Planning Stage to smooth out the game.