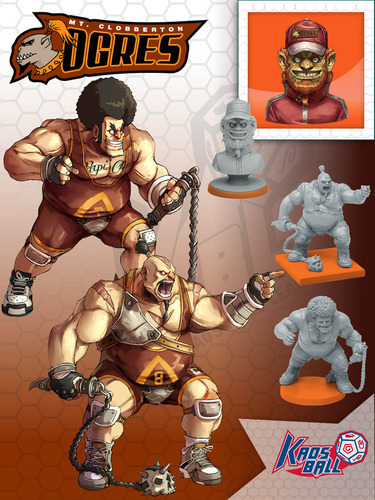 While Kaosball won’t replace my love of fantasy football, it was a fun sports-themed board game that I’d like to see on the tabletop again.

I was left in the dust by my opponents last night, but I started to “get” it as the game progressed. There was almost no point to getting the ball. It was all about fighting your opponents trying to end up in one of the scoring spaces.

I kept forgetting to use my team’s special ability (the Ogre “Stomp”) and I made the mistake of trying to play like a real game of football. Getting the ball to the “end zone” was next to impossible. We were playing a free-for-all, so instead of two-on-two, it was every player for themselves.

Excellent theme and top-notch components mean I’m ready to play again. I need to redeem myself after posting a first-match goose egg.