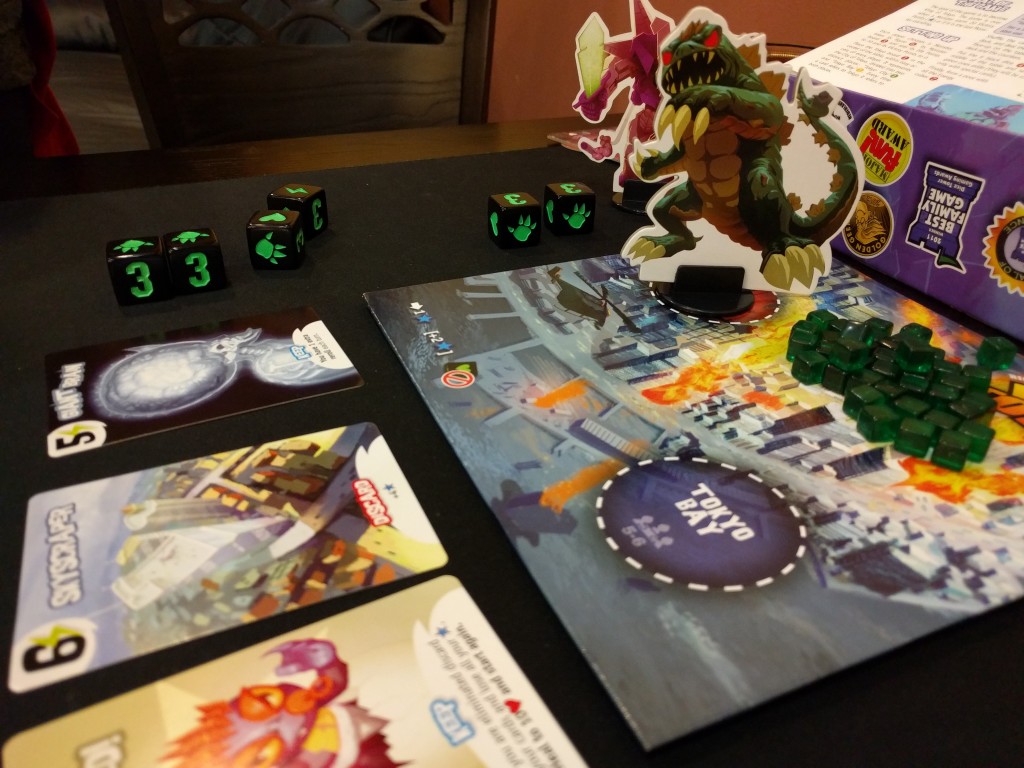 Last year our local library sponsored a game night that my wife and I really enjoyed. One of the games we played was King of Tokyo, which was a first for us.

We took to it right away. The theme was a throwback to my childhood, when KTLA (or was it KCOP?) would show Japanese monster movies every Saturday (I’m not sure when Kung Fu theater became a thing, but let’s say that monster and martial arts movies were a huge part of my childhood).

For our first game I picked Gigazaur, the generic, non-copyright-infringing version of my favorite movie monster, Godzilla. In the base game of KoT, all of the monsters are the same, with no special abilities except the ones you buy during your turn, so you’re just looking to grab the coolest monster for the match.

Play is basically Yahtzee with fighting, which explains its great appeal. The roll-up-to-three-times mechanism is familiar, even if all of the symbols on the dice are not. If you roll a set of three numbers, you can score those points (three 2s, for example, scores 2 points). Roll the claw and deal damage to your opponent(s). Roll a heart and restore one of your hit points. Roll a lightning bolt and take an energy cube, which is required to buy the special abilities cards.

If you’re in Tokyo, then any damage you deal goes to all of your opponents and you’re not allowed to heal; that’s the price you pay to be king. Players outside of Tokyo only deal damage to the monster in Tokyo and they can heal themselves. However, after being attacked, the Tokyo occupant can yield their spot to their attacking opponent.

Special abilities like bonus energy cubes, extra damage, extra healing, and more keep the game from being a monotonous dice roll fest. It’s fun teaching this game because almost everybody has played Yahtzee so it’s not difficult to learn. I’ve taught this to young and old alike and after a turn or two they know exactly how to play.

This isn’t the most complex game, obviously, but is it fun? Of course it is! Roll those big chunky dice, smash your opponents, and earn those victory points. Last monster standing (or the first to 20 points) wins. King of Tokyo flies when it’s only two players and even though the interaction is better with more players, it slows the game down so we usually play to 15 points or the last monster standing.