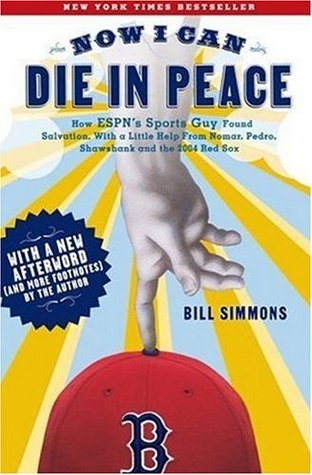 Now I Can Die in Peace by Bill Simmons

I scored a copy of Bill Simmons’ Now I Can Die in Peace at my local used bookstore tonight. I’ve read it before, but didn’t own a copy, so one dollar made me the proud owner of a hardcover in excellent condition.

I read the first two chapters again and it was like seeing Jordan in his prime. You know how great Simmons was back then? Even a diehard Angeleno like myself would actually read and buy a book about a fan’s love for the Red Sox (and Celtics and Bruins). Simmons’ writing was brilliant, funny, and witty. Within those first two chapters are pop culture and political references that only he could pull off.

He was at the top of his game, back before his writing went downhill, thanks to his forays into television, podcasting, and documentary films. His television work was terrible; for as great a writer as he was, he was extremely bland on air. I liked some of his podcasts, but listening to him figure out NFL lines wasn’t nearly as enjoyable as reading his weekly NFL picks column.

Without a doubt, his 30 for 30 documentary series for ESPN was the best non-writing work he did. I’ve loved so many of those films, from Michael Jodan’s minor league baseball career to  Vlade Divac making amends with Drazen Petrovic’s parents.

It was quality television, which is why HBO snatched him up. I have my doubts about a weekly talk show featuring Simmons, but if he can contribute behind the camera like he did on 30 for 30, then he’ll continue to have a successful career.

It’s just too bad that one of my favorite writers is no longer known for his writing.