My favorite deck-building games (Trains, Clank! In! Space!, and Tyrants of the Underdark) have other mechanisms that make them more than just a card game. In Trains you build a network of train routes, Clank! In! Space! features push-your-luck and set collection, and Tyrants of the Underdark adds in area control. All of these games are based on deck-building and contain other elements that separate them from being another draw-five-cards-and-play Dominion clone.

Promenade from designer Ta-Te Wu and Sunrise Tornado Game Studio is a deck-building game that adds market manipulation to the mix. You play as an art connoisseur trying to amass the most expensive collection of paintings. You do this by acquiring paintings from the promenade and showing them in museums. 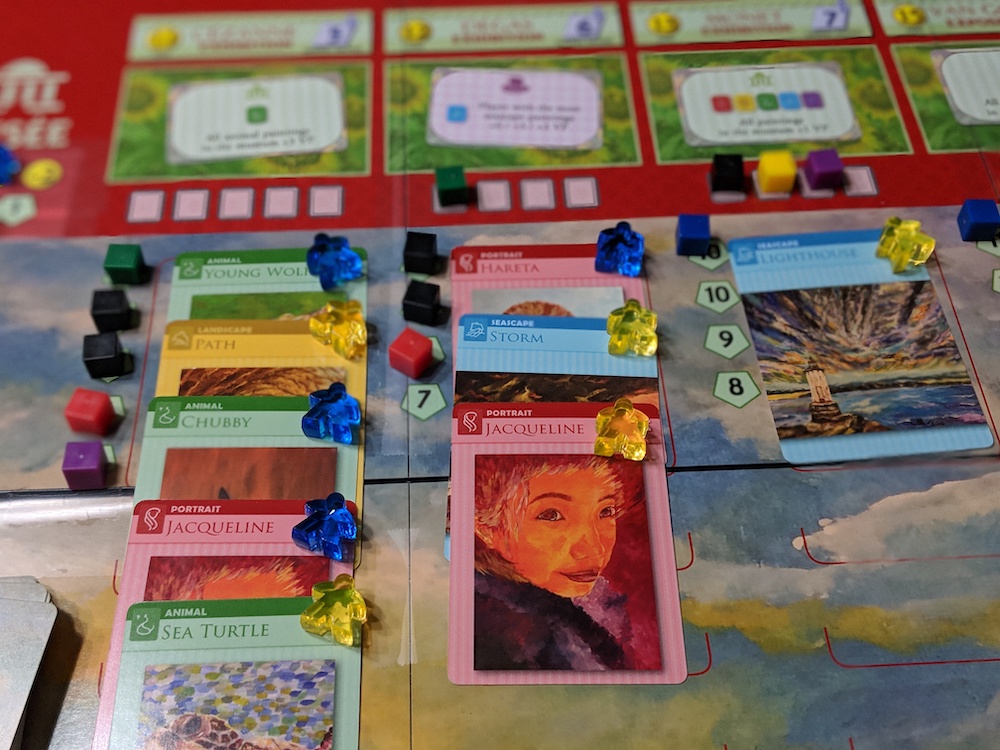 Players begin the game in typical deck-building fashion, with the same five basic gold (money) cards; however, in Promenade you’re also given five random painting cards. Painting cards serve two functions in the game: they can be used as money to purchase other painting/money cards or they can be displayed in the Museum for immediate victory points and possible end-game scoring.

The main board contains the Museum where all players display their paintings. These will earn them points based on whether or not an end-game goal is unlocked. Each exhibition in the Museum can display three to five paintings, and if any are filled up then that particular end-game scoring bonus is in play.

Players may perform two of three actions on their turn:

What makes Promenade so interesting and engaging is the Market Rating board. Each painting genre/color’s value is tracked here; each starts at one. So, if you draw five painting cards on your first turn, you have five gold to spend. Each time a painting is purchased from the Promenade or displayed in the Museum, its genre/color Market Rating will go up in value. Those same paintings that were worth only one gold each at the beginning will be worth more as the game progresses.

The game ends when there are 12 or more paintings in the museum, the main deck has been depleted, or one of the rating markers is 70 or higher.

End of game scoring consists of any end-game bonuses that were unlocked via the various exhibitions. You’ll also score points for your gold cards, depending on its current market value. Finally, you’ll get points for the painting cards in your deck, also depending on their current Market Rating. 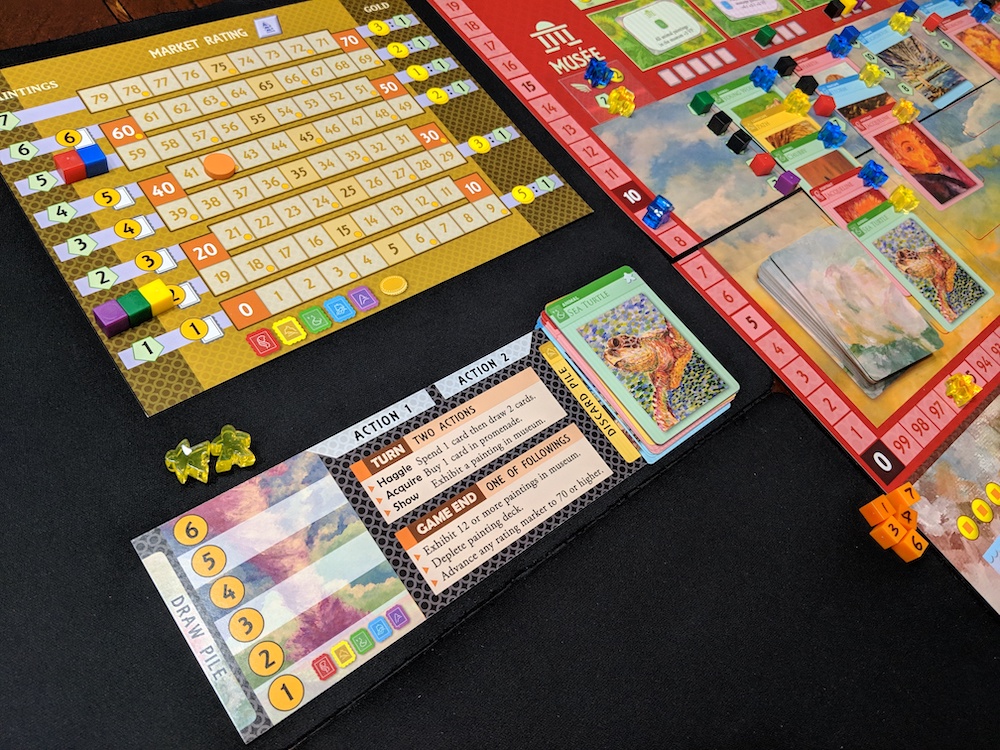 Ta-Te Wu and Sunrise Tornado Game Studios have a hit on their hands in Promenade. It’s a unique, fun, and enjoyable deck-building game of art collecting that gamers will enjoy, even if they know nothing about art, investing, or investing in art. The market manipulation mechanism is my favorite part of Promenade; it adds a nice layer of depth to the game and makes it stand out among other deck builders.

Veteran deck-building players will appreciate how trashing cards happens: first, you can trash your starting cards or the 3-gold cards after using its bottom-card ability. Second, you can display a painting card in the museum, thus earning you immediate points and possibly end-game points. It’s a neat way to trash cards, since it earns you points, much like the Entomb action does in the underrated deck-builder Valley of the Kings. The set collection element comes into play here as well, since the various paintings will score points based on their final Market Rating.

The art collection theme works quite well in Promenade and the game is much more satisfying than if it would’ve been set in yet another generic fantasy world. The artwork is gorgeous; whenever I played it felt like I was wheeling and dealing valuable paintings. Everyone I played with was impressed by the game’s art and they were always blown away when they learned that the designer painted everything by himself.

Promenade has been a pleasant gaming surprise during the first quarter of 2019. While I’ve liked Ta-Te Wu’s previous Kickstarter games, I absolutely love Promenade. It takes the familiar deck-building mechanism and blends it with market manipulation into an entertaining game with a unique theme.

Thanks to Ta-Te Wu for providing a copy of Promenade for review. The Promenade Kickstarter campaign runs until May 12, 2019.