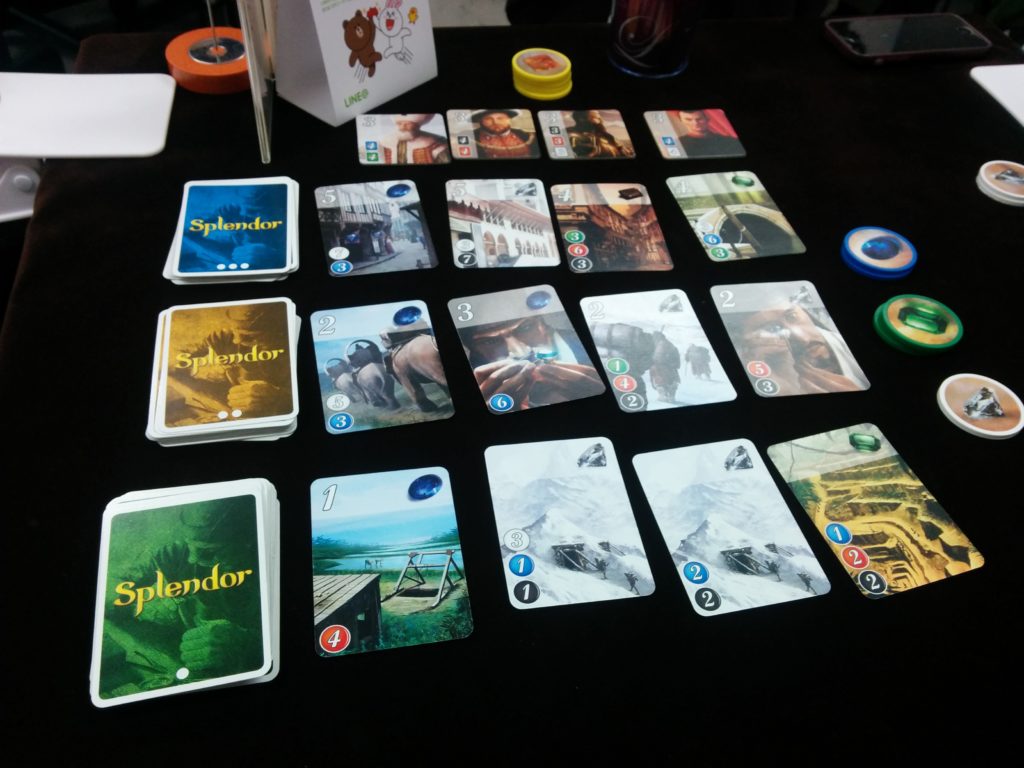 Earlier this year my wife and I visited Tokyo for the first time. We were there to see our daughter, who was completing her study abroad program. Our 10 days in Tokyo were nothing short of amazing and I’m forever spoiled in terms of sushi and ramen; anything I eat here in the U.S. simply won’t compare to the food we had in Japan.

One pleasant surprise we experienced in Japan was finding a board games cafe. I’d read about Dear Spiele on the boardgamegeek.com Japan forum, but had no idea if we were anywhere near it or if we could find time to visit. After a quick consult with Google Maps, we discovered it was a short train ride away from where we were staying.

It’s not the easiest place to find, but we soon found ourselves walking a few flights of stairs in a nondescript building before opening the door to a wonderful space full of games and gamers. The language may have been different, but the scene was just like any American game store or cafe: groups of players huddled at their tables, some contemplating moves, others pulling off winning maneuvers as their opponents groaned.

One of two walls of games at Dear Spiele

Since we hadn’t seen our daughter in such a long time, what better place to replicate our family game night than Dear Spiele? Of course, it seemed like the perfect place to play King of Tokyo; unfortunately, all of the power cards were in Japanese and we didn’t want to force our daughter to try to translate every one as we played. There were hundreds of games to choose from, though, so I picked a few that were not language dependent. Our favorite, by far, was Splendor.

Splendor is a card game with card drafting and set collection, and it also features a neat little engine-building mechanism that is easily learned by new players. The object of the game is to score 15 (or more) victory points. There is a tableau of 16 cards in three rows; these cards are used to score points, but not all of them have points on them. To take a card, a player must have the correct number of tokens matching the gem icons on that card. These tokens are poker chips with a specific gem icon and color printed on them. For example, if somebody wanted a 1-point card that costs four red gem icons, then they must have four of those gems in their hand.

Each turn, players may take three gem tokens of different colors or they may take two of the same color (but only if that stack of tokens has at least four).

There is a limited number of gem tokens available and each player can only have a maximum of 10 in their hand, so they will have to buy “development” cards. These development cards cost a certain number of gems, but once they are bought, they are a permanent gem in front of that player. So, if you have a blue gem card in front of you and you want to buy a card that costs two blue gems, then you can buy it if you have a blue gem token, which, along with your blue gem card, equals two blue gems.

Cards that are worth more victory points cost more gems, so players must buy many development cards so they can afford these higher-priced cards (note: cards with victory points also have a gem on them that will become part of the player’s resources). Players can also gain additional points from the noble tiles. A noble tile can only be earned by having the appropriate number of gem cards; players cannot use gem tokens to purchase these. So, if a noble tile has a price of 3 black, 3 white, and 3 red gems, then a player will only receive it if they have 3 black, 3 white, and 3 red gem cards in front of them.

I remember reading an article (or was it listening to a podcast?) about how Splendor is a good “next step” for the new gamer, especially after they’ve played Ticket to Ride. There are some similarities like collecting sets of something for points (gems in Splendor, trains in TTR) and there’s the tension of trying to get the right amount of items to score points before your opponents (getting the right combo of gems versus timing your rail-laying just right). The elegant gameplay is here, too, as players can do one of two actions per turn: take tokens or buy cards.

However, Splendor has more replayability and it plays well with 2-4 players, with games typically finished in half an hour. I’ve played it with hardcore gamers and casual gamers and I have yet to meet somebody who doesn’t like it. It should be a part of any gamer’s library.

Postscript: after returning from Japan, I surprised my wife with a copy of Splendor. It continues to be a favorite with us and our friends.