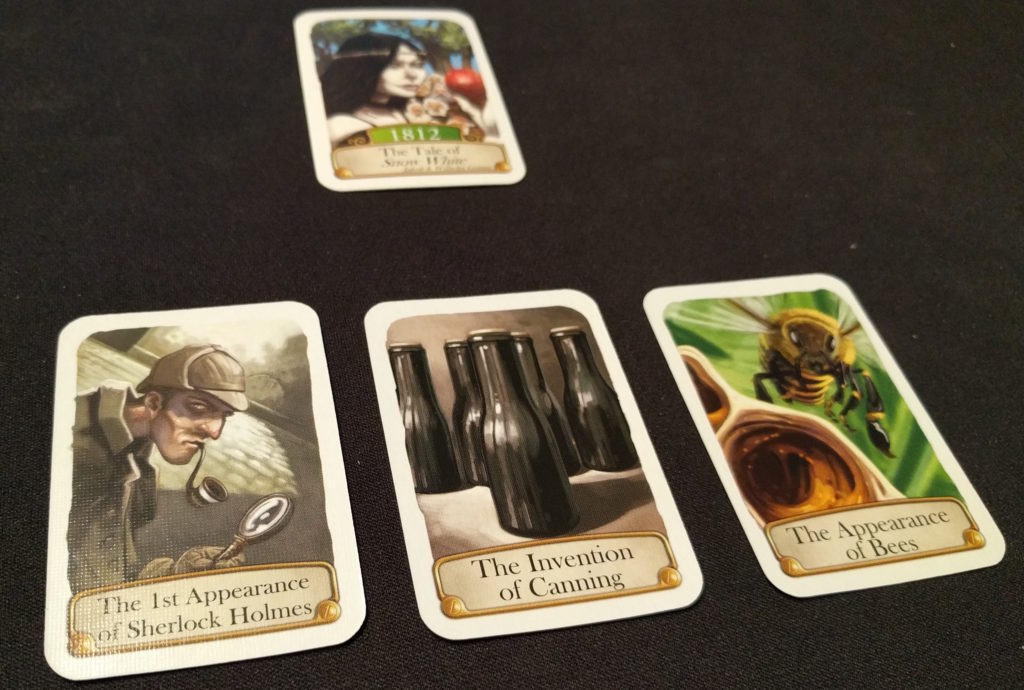 Timeline is a favorite among my gamer and non-gamer friends. It’s a light trivia game that can be played as a filler or as an introduction to the wonderful world of gaming.

The object of Timeline is to be the player with no cards remaining in front of you. Each player will receive four cards and all players must keep their cards in front of them with the date side down.

The first card from the deck is flipped over so that its date side is shown. This is the beginning of the Timeline. The starting player will choose one of their cards and place it to the left or right of the Timeline card, signifying whether they believe their card occurred before or after the event. They will then flip over their card. If the year on their card has been correctly placed on the Timeline, then the player’s turn is over. However, if they are wrong, then the card is returned to the box and the player draws another card. Now, it’s the next player’s turn.

The Timeline will expand as correct answers are played and this is where things get interesting. It’s easier to place an event before or after one other event, but when there are several cards in the Timeline it can be tough to pinpoint exactly when an event happened.  What year was the toaster invented? Was that before or after the invention of the camera? And did it happen before or after Cinderella was written?

While I’ve never been good at memorizing dates, Timeline allows you to guesstimate when things happen. You can generally figure things out based on historical context, but when you’re off it can be hilarious. Almost every game I’ve played has resulted in at least one “Wow, I had no idea that happened then!” comment.

Obviously, like other trivia games, there can be limited replayability if you play enough and begin memorizing dates. Thankfully, there are several expansions and they’re all reasonably priced (MSRP $14.99; I’ve picked up copies on Amazon for as low as $8). It’s a much more fun and rewarding experience than Trivial Pursuit and other trivia games.