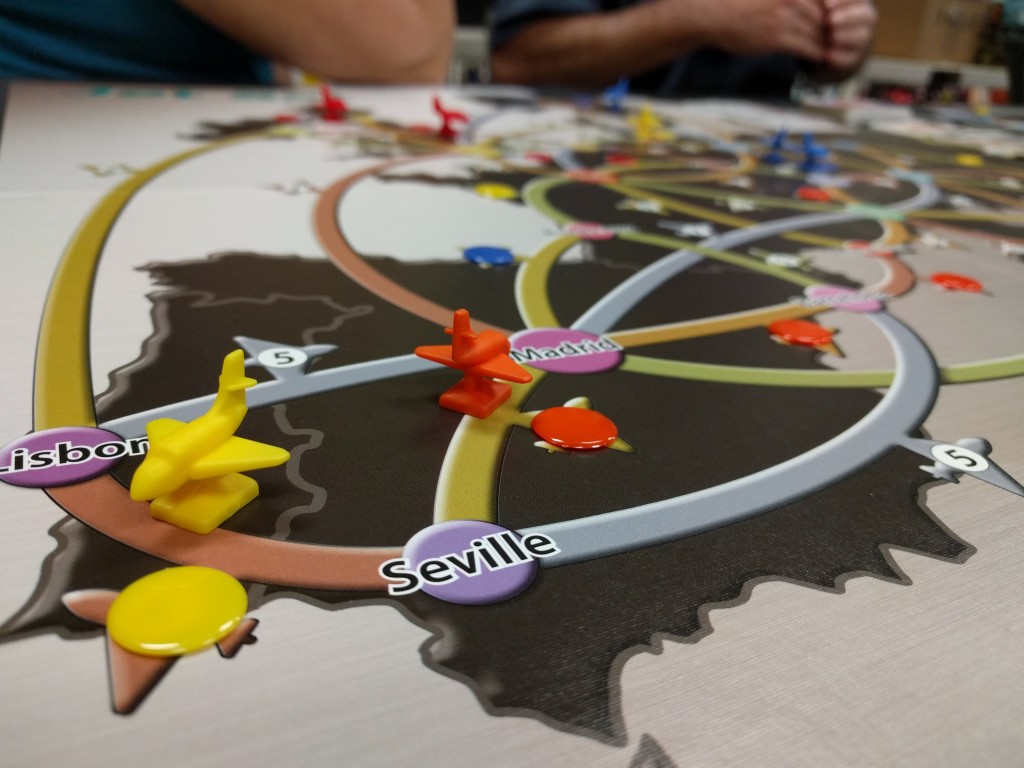 I’ve had a busy summer, so I haven’t been attending my weekly gaming group on a regular basis. I’ve missed a few weeks and other times I’d stop by for a quick visit, sometimes playing a filler game or two.

Last night I was back at my usual spot, hanging out with my gaming buddies. Ever since we started advertising on Meetup.com, we’ve had new gamers join us each week. It’s nice to see new faces and, as always, it’s great trying out so many new and new-to-me games.

I’d never heard of Jet Set before last night and it turned out to be a fun game. It’s like Ticket to Ride for gamers. You’re flying around Europe and establishing links between cities and earning Victory Points for each link you claim. The end game consists of you flying around one of your secret routes (the ominous-sounding Final Flight) for more VPs.

Like TTR, Jet Set allows you to do only one action per turn: earn income from your Flight cards, spend your income to claim links, place planes on the links, or claim an available Flight card (by completing a link).

What separates Jet Set from being a TTR clone is its economic mechanism. You earn money on the Flight cards that you claim, which allows you to buy more planes and afford more links. It’s not as easy as just laying down your trains in TTR; you must have enough money to play your planes and if you’re playing it on someone’s link, then you’re paying them as well as the bank.

Jet Set has a bit more depth to it than TTR, but maintains the streamlined one-action-per-turn element that keeps the game moving. There’s some light number-crunching as you figure out the cost of certain actions such as playing planes on an opponent’s link or earning income, but overall it’s a solid route-building game that’s worth a play.