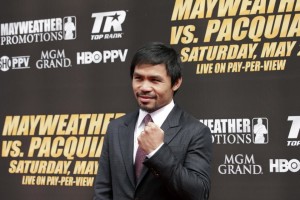 Today was the only pre-fight press conference for the Pacquiao-Mayweather bout on May 2nd. They probably could have done without doing any publicity for the fight, since we’ve had five years of  the best fighters of this generation going back-and-forth in the media and social media.

It was less than two months ago when I wrote that the fight would never happen and that if it did, then Mayweather would win via a do-just-enough-to-sway-the-judges decision. During today’s press conference, I found it interesting that Mayweather referenced the Hagler-Leonard superfight in 1987.

I was a huge Leonard fan going into the fight, but also liked Hagler, thanks to him being in the greatest fight I’ve ever seen, Hagler-Hearns. It was what a superfight was supposed to be: two top fighters going at it. No controversies, no referee involvement, no crooked judges, and in the end, we got three of the greatest rounds in boxing history, with the Marvelous One victorious.

Hagler-Leonard was hyped to be the same thing, but it wasn’t even close. All we got was Hagler’s odd decision to switch to orthodox for the early rounds, Leonard stealing rounds with late-but-ineffective flurries, and a still-disputed split decision for Leonard. I was rooting for Leonard that night, but even I conceded that Hagler was the better fighter that night. I was just as stunned as anybody by Leonard’s win. He pulled a fast one on the judges and the boxing public that night: he fought in spurts, doing flashy work to influence the decision. But his best work might have been the pre-fight psych job he did on Hagler: why else would Hagler switch from his natural southpaw stance? He thought he was outsmarting Leonard, but Leonard already had Hagler going away from his strengths.

Here’s what I think Mayweather’s thinking. Five years ago, Manny was in his prime, a lightning-quick fighter with thunder in his fists. Mayweather wants his perfect record intact, so he throws the red herrings of PEDs, drug testing, Bob Arum, etc. until Manny wears down after a few years. Just as Leonard waited for the right time to face Hagler (Leonard retired before they were supposed to have their first superfight, leading to the Hagler-Hearns classic, and after the Hagler-Mugabi war, Leonard unretired), Mayweather thinks he can psych-out and out-defense Manny.

And this is what is going to lead to Mayweather’s first professional loss.

While both fighters are past their primes, it’s Mayweather who’s going to wish they’d fought five years ago. Freddy Roach said that Floyd’s legs are a bit shot and the last time he said that, Manny sent Oscar De La Hoya into retirement. It’s true that Manny isn’t the powerhouse he once was and ever since he beat Miguel Cotto, he’s been on the downside of his career.

However, Mayweather hasn’t fought anybody with fists like Pacquiao. Fighters age and lose their speed, but not their power. Manny won’t throw those crazy 11-punch combos anymore, but he can sit down on his punches and punish Mayweather, who won’t be able to shoulder-roll and out-quick Manny. After eight rounds of getting hit like he’s never been hit before, Floyd will go down for his first loss in the 9th round.

And next year around the same time, we’ll all pay another $100 for the Pacquiao-Mayweather II pay-per-view.