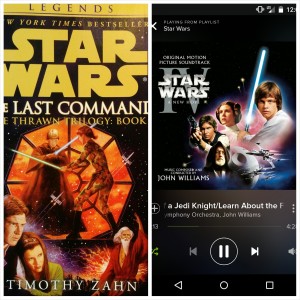 Reading and Listening to Star Wars

For lunch today I read The Last Command, the final book in the Thrawn Trilogy, and listened to a Star Wars playlist on Spotify. I struggled to get into this book when I first started it; I felt that I’d waited too long after reading the first two. I even thought that it might join the list of books that I start but don’t finish.

Thankfully, things picked up around the 100-page mark and I can see why this trilogy by Timothy Zahn is so well-regarded by Star Wars fans. He captured a lot of the spirit from the original trilogy while introducing new and exciting characters; so much so that sometimes the original characters (Luke, Han, Leia, Lando, Chewie, Threepio, and Artoo) seem stale in comparison. Thrawn, in particular, is a stellar bad guy in the Star Wars universe. I’m nearly done with the book and I’m curious to see how it all ends.

One thing that’s been consistently good throughout the Star Wars series? John Williams. I listened to the music from the films (yes, even the prequels) as I read each book in this trilogy. Reading and listening to Star Wars might not be as mind-blowing as the films, but it’s the best we can do for now … at least until December.