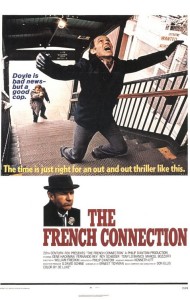 As I wrote at the start of 2015, one of my goals this year is to watch all 100 of the AFI’s 100 Greatest American Films of All Time. It’s something I’ve wanted to do for awhile, but never committed to until now. I’m not watching them in any particular order, just whatever I’m in the mood for or have readily available.

Last night I fired up Netflix for the first film on my cinematic journey: William Friedkin’s The French Connection (No. 93 on the AFI list). I’d never watched the movie from beginning to end, just catching clips here and there over the years. Of course, I knew about The Chase, having seen it in various Hollywood retrospectives. It’s what everybody talks about and for good reason: it’s awesome and exciting.

The other thing that everybody talks about? Gene Hackman. He’s brilliant as Popeye Doyle and absolutely owns every scene he’s in. He’s racist, drinks too much, and obsessed with his case. Roy Scheider is solid as his partner Cloudy. Critics have raved about the chemistry between the two, but I feel like almost anyone could’ve been paired with Hackman; he’s that good.

According to film historians, the violence was cutting-edge at the time, but it’s tame by today’s standards. I loved how Friedkin went with a documentary feel to a lot of the movie. He captured a lot of the grittiness of early ’70s New York and it never felt like I was watching the action on a soundstage. I’m not sure why English subtitles weren’t added to the scenes in French; was it supposed to add mystery and intrigue? I just felt frustrated that I hadn’t done better in my college French classes.

Overall, I liked The French Connection. It’s a solid crime thriller with an anti-hero lead. Watch it for Hackman’s Oscar-winning performance and the exhilarating non-CGI car chase.