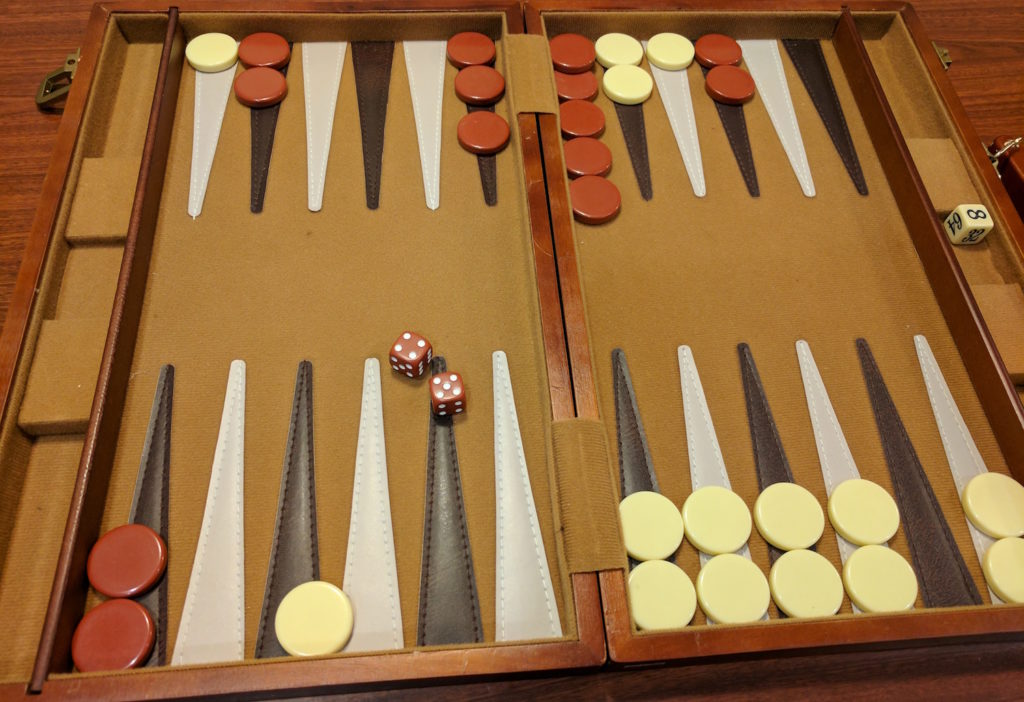 Technically, my Every Night Is Game Night: My Daily Play & Blog Challenge is over, but I missed a few days so I’m writing about other games I played during May. This is post no. 29, so I’ll write two more and consider my quest completed. What are you playing these days? Tweet me and let me know!

I didn’t learn to play backgammon until about 10 years ago, back when game night meant poker games that lasted all day and/or all night. I learned the basics online and then a few of my poker buddies and I would play games between poker hands.

Backgammon’s history has always fascinated me. The earliest known set was found in Iran and dated 3000 B.C. It’s mind-blowing to think about a game that’s been around 5,000 years! One of my relatives through marriage is from Turkey, where they call the game Tavla, and I try to bring my backgammon set whenever I know we’ll see each other. He’s a fantastic player and sees all of his moves quickly. Thankfully, he’s patient with me while I figure out my moves.

Backgammon is a racing game at its heart, with dice for movement and a little take-that as well. It’s an abstract game with no theme, but that doesn’t stop me from enjoying it. The goal of the game is to get all of your pieces off the board. On your turn you’ll roll the dice and move a piece (or pieces) according to the pips on the dice. For example, if I rolled a 3 and 2, I could move one piece 3 spaces and another 2 spaces, or one piece a total of 5 spaces.

If you land on one of your own pieces, that’s fine, but if you land on an opponent’s piece, then they’re sent off the board to the middle slot. They can’t move any other piece until they’ve gotten that piece back onto the board. Think of it like jail: the game continues without you until you roll the number that will get you out.

There’s a lot of tactical strategy involved since the dice determine your movement. Sometimes the dice seem to be against you, but other times you’ll roll that perfect number (usually doubles) that give you the advantage.

Even for a game that’s thousands of years old, I’ll never turn down an opportunity to play it. Once you get the hang of the rules and figure out some basic opening moves, games go by quickly. As long as both players know the game, it’ll only take about 10-15 minutes to play and people usually play a set of games for a match, like best of 5 or 7.