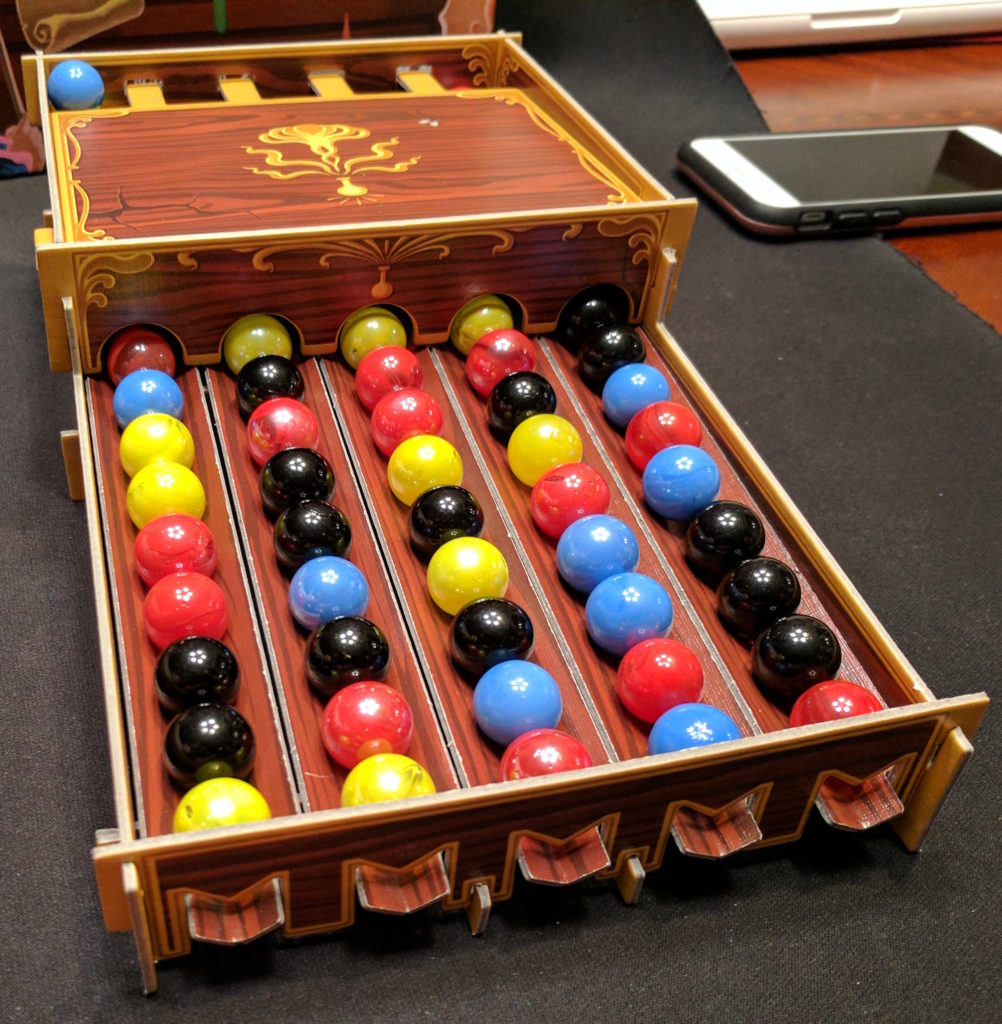 I got an absolute bargain last year when I bought my copy of Potion Explosion. Target was having one of its Buy 2 Get 1 Free board game sales and Potion Explosion was on the list. I quickly text messaged my gaming buddies and the first two to respond were in on the deal. I bought the games online and chatted with a customer representative, who was nice enough to match the current Amazon price. After the discounts, I paid less than the MSRP of one copy for three copies, all shipped for free.

Even at full MSRP, I’ve gotten my money’s worth and then some out of Potion Explosion. I love bringing it to the table: there’s something about all of the colored marbles, the cool-looking dispenser, and the tactile sensation of playing that attracts people to the game. It’s like an analog version of Candy Crush as you try to manipulate the marbles to collide into each other.

Players are apprentices at wizard school trying to learn how to create all of these potions. They begin with two potions on their desk that they must complete by using the ingredients (marbles) from the dispenser. On their turn, a player will pull take one marble and if the marbles that collide are the same color, then they also take those. There can be some fun chain reactions with tons of marbles being pulled out.

Players also have the option of asking for help from the professor. This allows them to select any one marble without causing an explosion and can be used to set up bigger chain reactions on their turn. However, asking for help earns a two-point penalty token.

Once you’ve completed a potion, you’ll have a special one-time use ability that will help you get the marbles you need to complete future potions. After you complete a set of five unique potions (or a set of three similar potions), you get a skill token that’s worth four points at the end of the game. In a two-player game after four skill tokens are collected, the end game is triggered.

Players count up their skill tokens and the points on each of their completed tokens, then subtract any professor penalties. Most points wins.

Potion Explosion was an immediate hit with me and my wife as well as my friends and family. It’s an easy game to learn and it’s an absolute joy to watch those marbles collide in just the right way to help you finish a potion. Even for hardcore gamers, Potion Explosion makes for a fun break between heavier games.