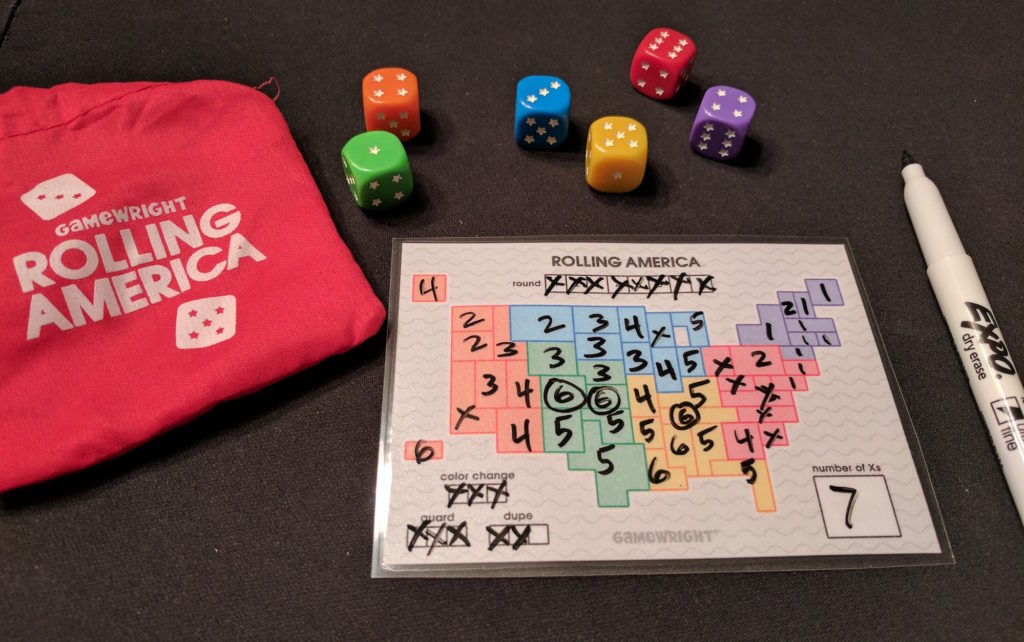 Tonight was my weekly game night and four of us had just started a game when I had to leave due to a family emergency. Thankfully, everything worked out and a few hours later I was back at home so I decided to play a solo game of Rolling America. I wrote about this roll-and-write game for Geek & Sundry recently:

Everybody receives a multi-colored map of the United States, then seven different colored dice are placed in a bag then drawn and rolled one at a time. For each die rolled, all players must write that number in the corresponding colored region of their map. After six of the seven dice are used, the dice are put back in the bag and the next player starts a new round.

Placing the numbers is where the tension lies in Rolling America since numbers cannot be more than 1 above or below an adjacent number. So, if a player rolls a yellow 3, they must write it in a yellow state and it must be next to a 2, 3, or 4. If there are no available spots, then the player marks an X in that state. After 8 rounds, players tally their Xs and the lowest amount of Xs wins the game.

Each player also receives three special powers that allow them to protect a number (thus allowing it to be adjacent to a non-conforming number), duplicate a number, and use a number in a different region.

I’m not much of a sodoku fan, but I like figuring out the right spot to place the numbers in Rolling America. It’s fun with multiple players and makes for a nice, mellow solitaire affair: it was the perfect respite from the earlier events of the day.