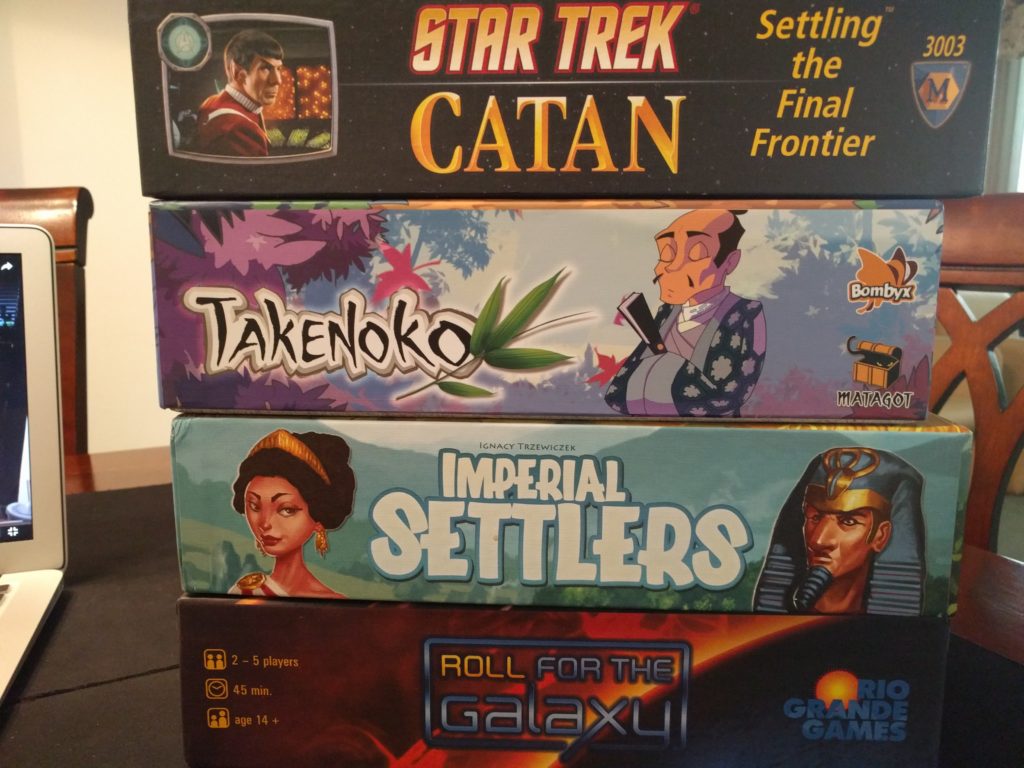 Games I Bought This Weekend

On the way to my fantasy football draft I picked up two used board games I won on a recent boardgamegeek.com auction: Takenoko and Imperial Settlers. I was pleasantly surprised when I opened Takenoko: although it was no longer in its shrink wrap, the cards were still in shrink wrap and the tiles were still unpunched. It was a great deal, paying less than half the MSRP ($50) for a brand new game. Imperial Settlers had a slight ding on its corner and two of the meeples were broken, but the meeples were the extras and I’m not worried about the box. Again, I paid less than half the MSRP ($50).

Yesterday I was in Orange County, which was excellent timing since I could pick up two games that I’ve been dying to get into my games library: Roll for the Galaxy and Star Trek Catan.

Roll for the Galaxy is awesome and it was the iSlaytheDragon.com Game of the Year for 2015, but I’m not very good at it. I always seem to be a step behind my opponents and haven’t gotten better than second place. Hence, my desire to own a copy: I need to learn the ins and outs of the game, the dice, the tiles, everything. I was close to pulling the trigger a few times on amazon.com whenever it dipped to $40, but I’m glad I waited. I managed to pay less than half the MSRP ($60) and I can’t wait to start rolling all of those dice.

Finally, Star Trek Catan was one of those on my Must Buy List, but it was never a priority until I found it for exactly half off MSRP ($50) in a boardgamegeek.com virtual flea market. I love the original series characters and their special powers in this version of Catan, which is definitely my favorite.

So for about the price of one brand new copy of Scythe, I was able to add four outstanding games to my growing library. I hope to add Scythe one day, but I’ll wait until someone’s tired of playing their copy so I can land another great deal. My bank account is thankful that I don’t follow the Cult of the New.