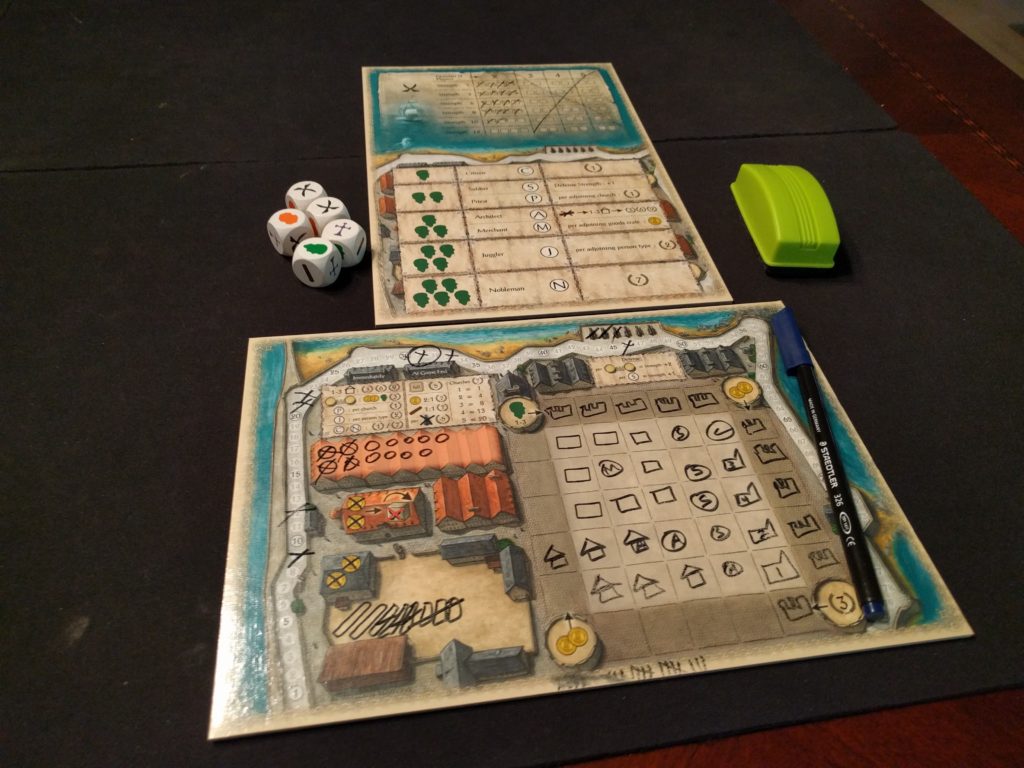 I picked up my copy of Saint Malo for the bargain price of $11, thanks to the Virtual Flea Market at Gamex 2016 (one of three conventions of the year hosted by Strategicon). I was intrigued by what was in the box: dry-erase markers, dry-erase game boards, and five dice.

Saint Malo is best described as Eurogame-style Yahtzee. You’re building your city of Saint Malo, trying to make it the most prosperous. You have five dice and you can roll up to three times before scoring and you’re only allowed to score one item. For example, after three rolls you have 1 log, 1 cross (church), and 3 heads (people); you’ll most likely score the heads.

The heads (they look like profiles) represent people you add into your city; depending on how many you roll will determine what type of person it is. So, score 1 person and it’s an ordinary citizen. Score 2 persons and it’s a soldier who will help you defend against the inevitable pirate attacks. Score 3 and it’s a merchant who will earn you money on the crates of goods in your city.

How do you add people to your city? Just draw a little circle on your player board and write the letter of the type of person (for example, “M” for a merchant). Where you draw your items matters as well, since they’ll score more or less depending on the adjacent items.

Likewise, you can add crates (goods) to your city, churches, logs (for building houses), and walls to defend against pirates. You roll up to three times, score the items you want, and draw them into your city. I’m not an artist, but it’s fun drawing little walls and churches onto your board. Unfortunately, there’s not enough room to write “Pew! Pew! Pew!” above your soldiers.

Here’s the catch, though: any pirates (the swords icon) that show up on your final roll count toward the running tally of pirates. Once a certain level is reached (for example, four pirates rolled for a two-player game), then you must resolve a pirate attack against your city. If your defense isn’t up to the challenge, then you’ll lose points.

I’ve only solo played the game a few times and I enjoy it. I haven’t gotten it on the table at game night yet, but I think it would go over well. There’s something about drawing on the boards that is unique and pleasing.