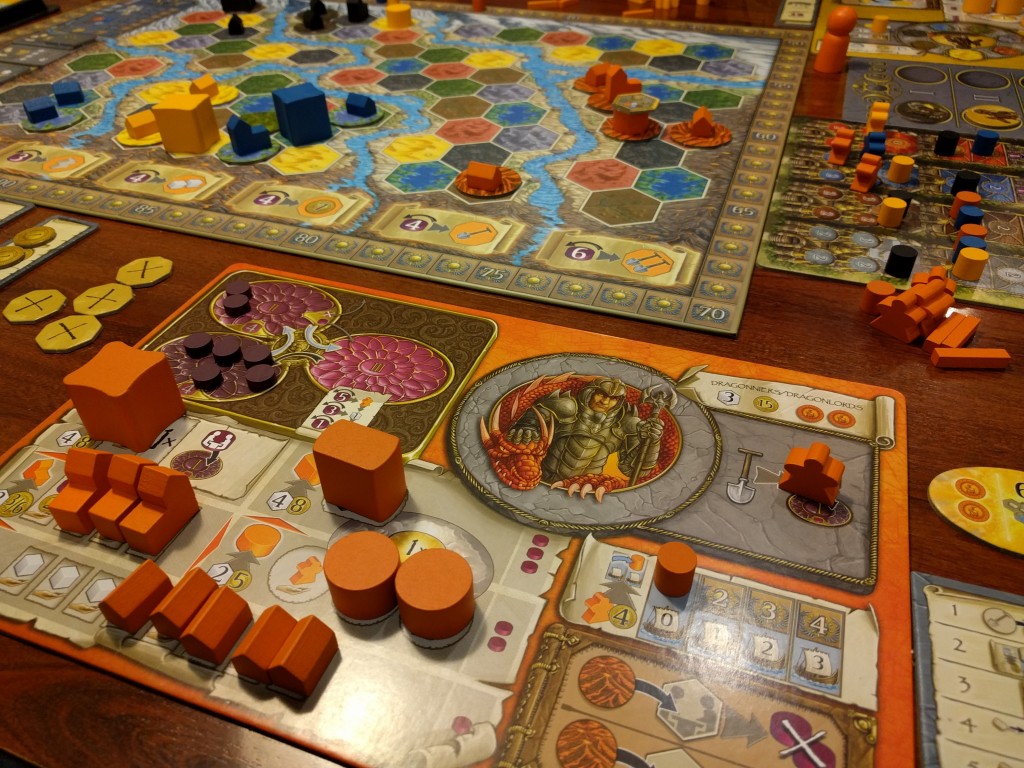 I tend to play games that are done within an hour, but when I’m in the mood I’ll hunker down for something heavier. Thursday night was that kind of night for me as I played Terra Mystica for the first time.  It’s a game that’s been on my radar; I’ve seen different people bring it to game night, but either it didn’t make it to the table or I was playing something else when a session started.

After my first play, I was impressed. Very impressed.

But as we all know, looks aren’t everything. After a few turns (well, more than a few since I’m slow in picking up games with tons of rules) it didn’t matter because Terra Mystica is a beautifully designed game and now I know why it’s so highly regarded.

Players are trying to grow their populations into neighboring areas by terraforming the land into something that their people can live on. This is a civilization building game with area control and an economic mechanism that forces you to think ahead while trying to get the most out of each turn. You want to be efficient in your moves and take advantage of your people’s special abilities. There are several ways to score points, so different strategies can be employed.

There are a lot of rules with plenty of actions available, but the player boards and cards have everything you need to know. I played with one of the expansion characters, so I asked about my abilities a few times before they sunk in; thankfully, the regulars in my gaming group are a patient and accommodating bunch.

I made some mistakes, but I knew I liked Terra Mystica when I found myself thinking about what I would re-do during my next game. Basically, I needed to get more settlements out so I could produce more workers so I could upgrade them more quickly and produce more income and power. Since I played with the dragon race, I was the only one that didn’t use the shovel icon for terra-forming. Instead, I had to use my power to do so. It wasn’t until the last two turns of the game (six total) that I realized I should have been upgrading my settlements faster so that my power would be cycled over into the second and third bowls, which was critical for using it.

I did win two of the races for the cults, thanks to my non-stop production of meeples, which I used to move those markers up. I was reminded that I could convert my meeples into workers, which could then be turned into money. I used that combo on the last turn, but again I wish I’d remembered to do it earlier so I could have expanded my city. If I had built a bridge, I could’ve connected my two cities and been in the running for largest city.

Again, there was a lot to think about every turn, as I tried to set myself up for later turns. More than a few times I was cursing myself for not having enough workers or money to build things.

Before we started the game my buddies told me that most people who play Terra Mystica usually want to play again so they can correct their mistakes.

I know exactly how they feel.