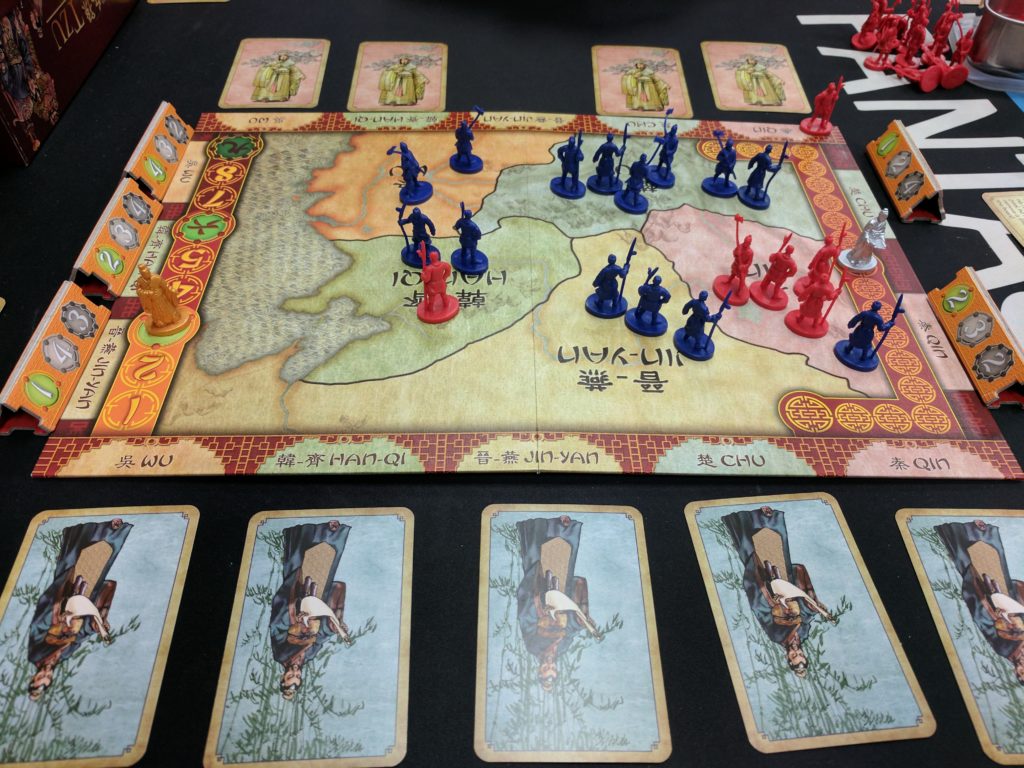 What a wonderful surprise Sun Tzu was!

Sun Tzu is a two-player war game of area control, hand management, and bluffing. It’s psychological warfare in ancient China, with thematic The Art of War text on the cards.

I scored my copy last year in a math trade and I liked the theme and premise, but it collected dust before I finally got it off my Shelf of Shame, thanks to another meetup with my buddy Daryl.

In Sun Tzu each player attempts to control regions in ancient China by using cards numbered 1-6. These cards are part of players’ hands throughout the game, but they also receive special one-time use cards after each turn: the numbers 7-10 and modifier cards like +1, +2, and +3.

For each round cards are played face down for each region, then they’re revealed one at a time to resolve battles. For example, in the Qin region Player A plays a “3” and Player B plays a “5,” then Player B places the difference (2 armies) on the region and they now have control of Qin.

Each round is made up of playing cards and resolving battles. There are nine possible rounds to a game, with scoring after rounds 3, 6, and 9; however, if a player ever reaches the maximum 9 points after rounds 3 or 6, then the game immediately ends. This is the basic gist of Sun Tzu.

But there’s so much more.

The special one-time-use cards are fantastic elements added to gameplay. For example, if I was trying to gain control of a region that contained a lot of my opponent’s armies, then I could play my “10” and hope that my opponent played a low card. This would allow me to take some of their armies from the board and replace them with mine. However, if my opponent had played their “+1” card, then my “10” was all for naught. Their “+1” card basically negates my 10, since it’s used as a +1 to anything I played. Thus, my 10 is trumped by their 11 and they get to add 1 army to the region.

Another cool one-time-use card is the Plague card, which, when played, cancels the battle in the selected region. It also calls for half of the armies in the region to be taken off the board. Since armies are limited (each player begins with 18 in their reserve, with a few more available via certain card effects or actions), this is a good way to gather your forces for future turns.

There are also one-time-per-game Warlord cards that can be used at any time. During our last game Daryl busted out a Warlord card to tip the final region to his favor, which led to his single-point victory.

Finally, there are event cards that can trigger other changes to the game if their conditions are met at any time.

I’m ecstatic that I was able to get this off my Shelf of Shame; Sun Tzu is a tense battle of wits between two tabletop generals. It’s become one of my favorite two-player games and one that I highly recommend (for a more in-depth review, check out the iSlaytheDragon.com review).