The upcoming Color It! from HABA is a relaxing a roll-and-color game for the whole family. Our pug Bruno made a guest appearance in yesterday’s Facebook Live at Five play-through!

Here’s a link to my review of Valley of the Vikings, a family-friendly dexterity game from HABA.

Over on @ThatHashtagShow I reviewed Valley of the Vikings from @HABAGamesUSA. Is this family-friendly game for you? Read here: https://t.co/L7FllKIMPH#boardgames #tabletopgames pic.twitter.com/xc7cZPiTT9

I’m posting about a game every day in September! Here’s a link to yesterday’s post.

Thanks to the good people at HABA, I received a copy of Tal der Wikinger recently. I’d seen T. Caires preview it in a video a few months ago and it looked like something my gaming group would get a kick out of.

The game’s title translates to Valley of the Vikings, but I like to call it what it is: Viking Bowling. This is a hilarious dexterity game where you’re setting up these Donkey-Kong-looking barrels then bowling a Raiders-of-the-Lost-Ark-style boulder, er, ball at them. Knock them over and you get to move the matching color’s Viking closer to the end of the pier.

Once a Viking goes into the water, you gain coins where your Viking is along the pier, either from the general supply or from one or more of your opponents. The wet Viking gets nothing, but goes back to the end of the line to try again. This is a clever catch-up mechanism and ensures that everyone will eventually fall into the water and allow others to score.

I love the HABA games I’ve played; they’re marketed to kids, but we adults enjoy them just as much, if not more, than the younger gaming crowd. 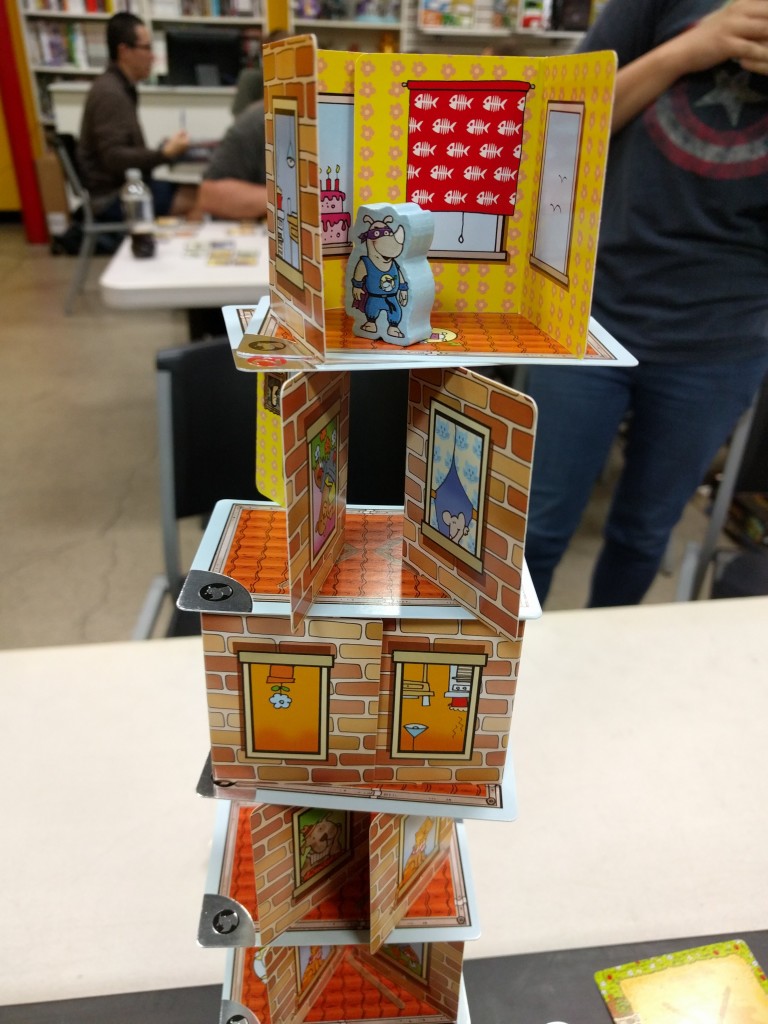 We had a packed house at our weekly gaming group, with several tables of us regulars alongside some new faces. As always, there was a wide variety of games on the tabletops including Specter Ops, Descent: Journeys in the Dark, Sushi Go Party, FUSE, Kingsburg, Othello, and several others.

My buddy Oscar brought Rhino Hero, which is one that has been on my gaming bucket list for quite some time. It’s a gamer’s version of building a house of cards.

Each player starts with five cards and plays one of them. First, they add the wall cards on the spaces indicated on the roof (or if they’re first, on the base) card. Next, they lay down a new roof card, which will indicate an action such as play another roof card, make the previous player go again, place the rhino figure on the card, and more. First player to play all of their cards wins or whoever has the fewest cards when the building comes crashing down is victorious.

It was nerve-wracking trying to place the cards on top of each other and the Rhino Hero meeple seemed like it would bring down the structure every time we moved it. I think we made it to seven stories before our building bit the dust.

I’m sure this will be a hit at my family game nights, so I’ve added it to my Wish List. All hail Rhino Hero!