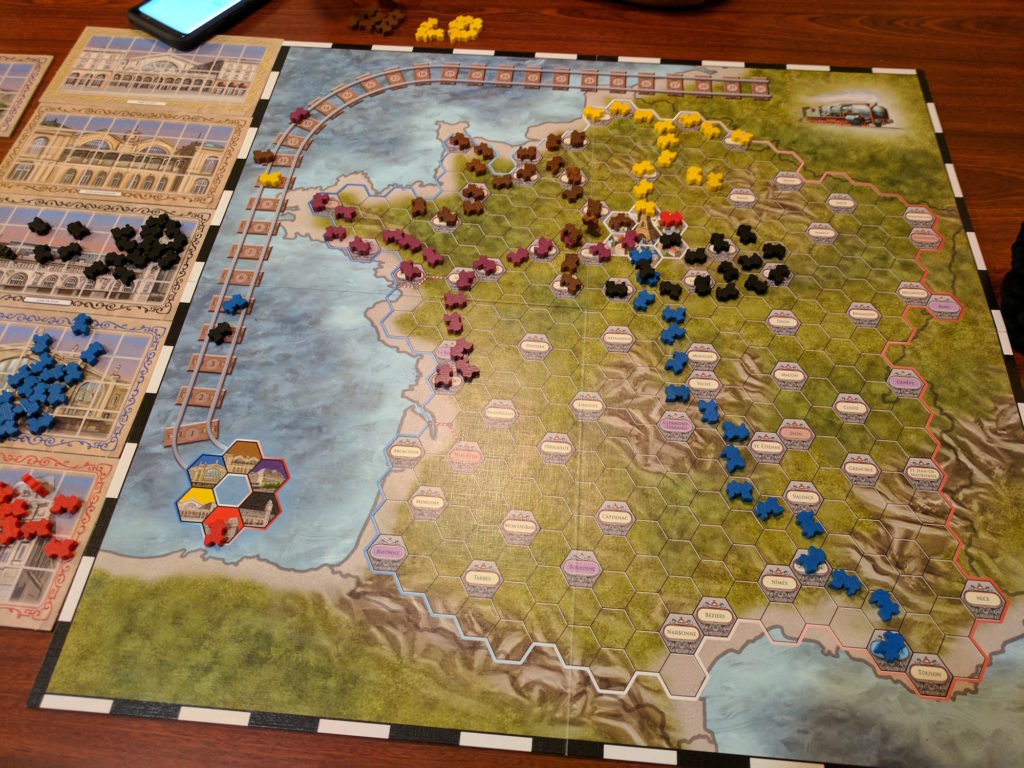 Paris Connection is an underrated train game of route building and stock ownership that is a perfect blend of gateway game simplicity with the substance of a designer game. I’d call it a filler-plus game; one that is easy to learn and quick to play yet offers interesting decisions throughout a session.

Players are trying to collect the most valuable stocks in Paris Connection, with points scored on the number of stocks you own in each color of train. Each player receives a number of trains randomly behind their screen to start the game. On their turn, a player can perform one of two actions:

That’s it. Simple enough for non-gamers, but it’s this dual use of trains that makes the game stand out. The trains are used to manipulate the stock price as they are moved into cities to score various points or onto empty spaces to keep the stock price at bay. Of course, as trains are laid out on the board, they can no longer be placed behind your shield for ownership.

Tonight I played a three-player game and won a close match. All three of us were driving the yellow and purple stocks up, then when I moved black, the next player also jumped onto black and sent it around onto a bunch of empty spaces. On my next turn I traded my last black for two purple trains, which I had guessed would be the next to jump in value. It did, then another player and I soon got to using the blue trains to race to Marseilles to end the game (the game ends when a train reaches this city or if five of the six colored train supplies are depleted).

Queen Games has frequent sales on Amazon and I scored this last year for $15 and it’s gone even lower since then. The components are top-notch, as they usually are with Queen Games, and it’s an excellent value for a solid game.