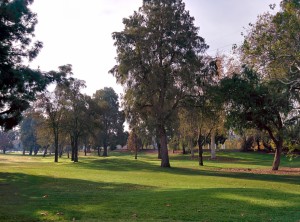 This year marks the fifth year of my golf career, which means I wish I would’ve started playing at least 25 years ago. Like my newfound love of running 5Ks, the aches and pains I suffer through now would’ve been more bearable as a young man. Every day reminds me that middle-aged healing takes much longer.

I learned to play golf at Los Feliz Municipal Golf Course. One day in 2010, I asked my brother to play a round with me. I’m not sure why I decided to do it and I don’t recall his exact response, but it was along the lines of “what the …?!” Neither of us had ever picked up a club before; the only sport we played in our younger days was basketball (with a smattering of football and baseball).

It’s no coincidence that the course was featured in one of my favorite movies, Swingers:

That movie and that scene in particular was a huge hit with me and my buddies, so I thought it was appropriate that I played my initial round there. I’ll have to dig out my scorecard from the garage someday for a good laugh: I scored either a 62 or 63 … on a par 27 course.

Still, Los Feliz was the beginning of my love affair with the game. In the years since (when I haven’t been dealing with a bad knee, back, or Achilles), I’ve played rounds all over Southern California and a couple of courses in Las Vegas, getting both of my brothers into the game and meeting lots of great people along the way. I’ve volunteered a few times at the L.A. Golf Show, won a putter signed by Ben Crenshaw, and was a walking scorer at the Soboba Golf Classic, where young pro Russell Henley was turning heads before making the leap to the PGA Tour.

Now that my nephew has taken a liking to the sport, I find myself revisiting some of the par-3 courses where I honed my skills. It’s been a blast, not to mention confidence-booster, hitting greens again on some of the shorter holes. It’s been meaningful sharing the game with him, teaching him the rules and etiquette as we bond at the courses that I learned at with his dad and other uncle.

I failed to reach my goal of breaking 100 last year, but I’m giving it another shot in 2015 and if I don’t do it, that’s fine. I’ll gladly settle for the quality time with my nephew on a golf course.