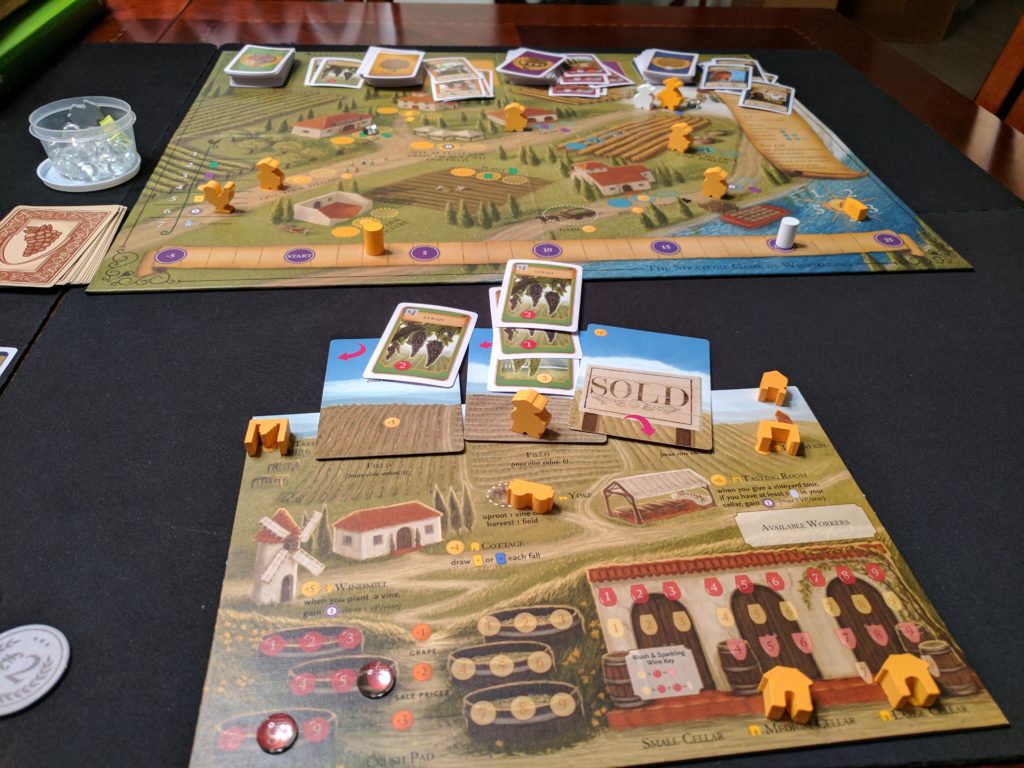 So far my 2017 has been an excellent year for board gaming. According to my Board Game Geek stats, I’ve played 65 different games for a total of 191 plays. Not bad!

I’ve solo played more this year, thanks to a binge of Viticulture Essential Edition (36 total plays). After picking up a half-priced copy of VEE last December (thanks, BGG flea market!), the game sat on my shelf for a month before I learned how to play. WOW. It’s the perfect blend of theme and mechanisms; it really feels like you have a little vineyard that you can build into a well-oiled wine-making machine.

It always takes me a game or two to really “get” any game I play and solo-ing VEE with the Automa cards helped me tremendously. When I eventually played with friends, I felt comfortable playing and teaching the game. I even played the solo campaign, scoring a 14 in the 8-game challenge.

My love of VEE led me to buy the Tuscany Essential Edition expansion. I haven’t played it yet, but I’m sure I’ll binge on that as well. And after playing Scythe, Euphoria: Build A Better Dystopia, Between Two Cities, and VEE, I consider myself a full-on Stonemaier Games fanboy.

Here are a few of the games I’ve enjoyed this year:

Santorini.The best two-player game I own. I’m writing another blog post about this wonderful game by Dr. Alan Gordon.

Imperial Settlers. Thanks to my gaming buddy Daryl for teaching me this one. It was a lot more think-y than I expected, but I like it a lot and it’s a fun solo game. Best of all, it no longer sits on my Shelf of Shame (unplayed games in my library).

Ca$h ‘n Guns. One of my favorites for an impromptu game night. My wife and I recently visited our daughter at college and played this with her and her roommates. It was a welcome study break for them and a fun way for us to spend time with everybody. Nothing says fun like pointing fake guns at your friends and family.

Baseball Highlights: 2045. Now that baseball season is about to start, I’m getting back into this fantastic deck builder. It never ceases to amaze me how Mike Fitzgerald managed to capture the feel of a baseball game with only six cards. Only six! It’s also a tremendous solo game.

Nexus Ops. In the context of most gamers’ Cult of the New obsession Nexus Ops is an ancient game, having been released in 2005. But it still holds up today and it’s interesting to see its influence on modern area control games like Blood Rage or Cry Havoc. Resolving combat can be frustrating or exhilarating, depending on your dice rolls, but it’s an excellent introductory war game. Best of all, it was a big hit at the weekly board games club I host at a local high school.