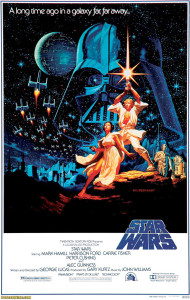 Over the next 365 days, in addition to blogging every day, I’m going to watch every movie on the American Film Institute’s list of 100 Greatest American Films. I’ll write about each film I finish, sometimes a review or some trivia, but hopefully something more personal and interesting.

Why watch these 100 films? Well, I’m a cinegeek and my love of movies goes back to my childhood, when a little film called Star Wars changed my life. I remember standing in line with my parents at The Academy in Pasadena, California, years before the theater was chopped up into a multiplex. The Academy then was a magnificent palace for the cinema, with plush balconies and a ceiling so far away that it seemed to touch the sky.

I remember standing outside in line with my folks, eagerly awaiting my first true movie-going experience. Once the film began, I was mesmerized, joining the crowd to boo Darth Vader’s first appearance on screen and cheering two hours later when the Death Star was blown to smithereens.

Mostly, I remember how I jumped at any chance to Star Wars again; 22 times over the next few years, long before my family had a VHS or DVD player. Repeated viewings on Spike TV were light years away, so my elementary-school self ended up going with every friend and cousin I knew to watch George Lucas’ masterpiece.

Now here I am, a lifetime later, eagerly awaiting December 18th for the release of Episode VII. Instead of gorging myself on all things Star Wars in anticipation of The Force Awakens, I’m going to watch the other 99 non-Star-Wars films on the AFI list. It’s actually something I’ve wanted to do for years, but never committed to doing so. I have a handful of these movies on DVD and Blu-ray and I’ll use Netflix, Amazon Prime, and my local library to complete my quest. I’m hoping, though, to see more than a few of these classics at special screenings done occasionally at the old-time movie houses in L.A.

By my count, I’ve seen 45 of the films on this list and I’ve caught bits and pieces of another 20, but like my elementary-school self, I’m just as excited to watch a movie for the first time as I am for the 22nd time.

1. The movie poster image above was taken from here.

2. There’s a small bit on the history of The Academy in Pasadena, CA, here.