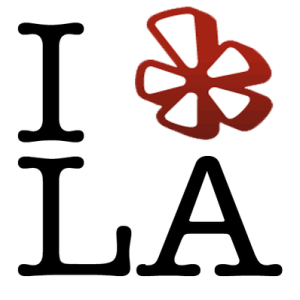 Like most people I know, Yelp is my go-to site/app for finding a place to eat. Back in the day I would thumb through the Yellow Pages’ restaurant section, going through each listing until something piqued my interest. A few years ago, Yelp changed this, giving me access to restaurant information and reviews as well. As I used it more, I noticed that there were all types of businesses reviewed on Yelp and I used it to plan some cool dates.

I received my first perk from Yelp in February 2011, before I even had a Yelp account: two tickets to the L.A. Derby Dolls, thanks to LA Community Manager Katie B. tweeting about a giveaway. My girlfriend and I went on our date and had a fun night of roller derby and food truck eats.

I created a Yelp account a few months later and wrote my first Yelp review, giving three stars to the Colton Golf Club. Although I wasn’t exactly prolific in my review writing early on (I had a grand total of 11 reviews by the end of 2012), I was slowly but surely becoming a Yelper. My reviews weren’t James Beard material, but I was honest and tried to be as informative as possible. I also used the site to plan a few more date nights with my girlfriend (who eventually became my wife!).

This all changed in 2013 when I signed up for a write-100-reviews-in-one-year challenge. My wife and I attended our first of many cool Yelp events. In November of 2013 I became a part of the Yelp Elite, a few weeks before I completed my 100th review for the year. In 2014 I was a Yelp Elite again, and pushed my yearly total to 120 reviews.

My Quest to Blog Every Day in 2015 has been partly inspired by my reaching my Yelp goals. I hope to be Elite again this year and I started another 100 reviews challenge today. Here’s my first review of 2015. Only 99 more to go!