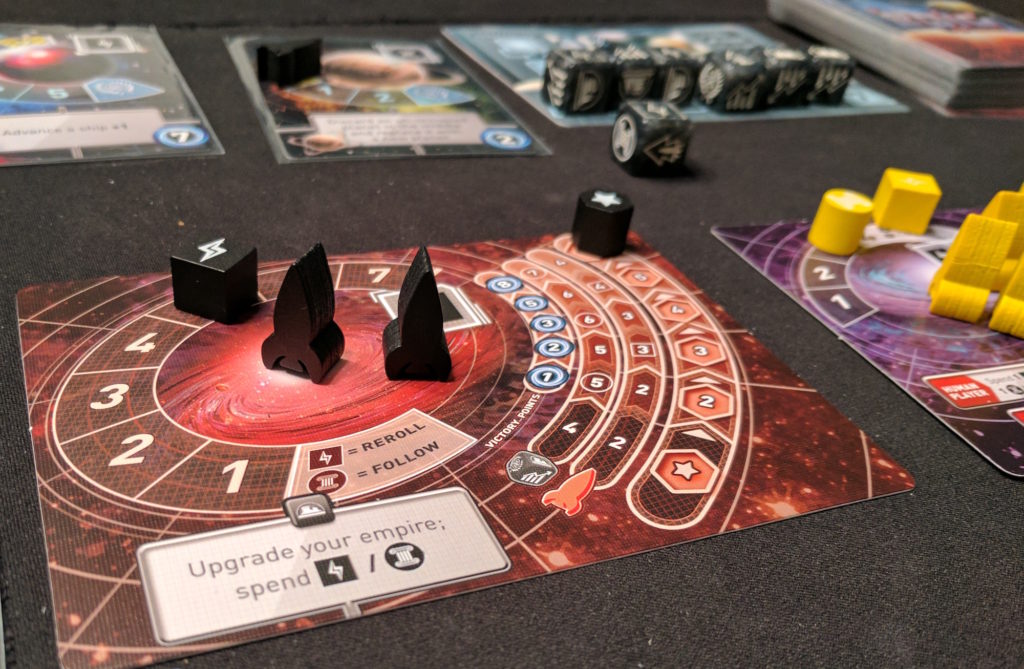 (My wife and I had a full day of travel and family fun yesterday so I didn’t play a game and blog about it. I’ll post one extra time this month to make up for it.)

It’s nearly 4pm on Sunday and I’m just getting productive. I’ve got some work to finish today, but I just played a quick solo game of Tiny Epic Galaxies. It’s no secret that I’m a Scott Almes fan: I own and have enjoyed Tiny Epic Kingdoms, Harbour, and I backed Tiny Epic Galaxies: Beyond the Black and Tiny Epic Quest on Kickstarter.

Tiny Epic Galaxies is a dice rolling and area control game that is an absolute blast. Each player is trying to improve their empire while also colonizing planets. During their turn, players roll the dice and land their ships on other planets (to perform a special action), orbiting planets (in hopes of colonizing them via an economic or diplomacy track), gaining resources, or upgrading their empires. Players perform these actions via their dice rolls.

If they roll what they need, then they perform their actions, but if not, there are several ways to mitigate unlucky dice rolls. They get one free re-roll of any of their dice. They may also use two dice to convert one into any action they choose. Finally, players may spend one energy to re-roll any remaining dice.

Victory points are scored as players upgrade their empire and each colonized planet is worth points. First player to 21 triggers the game end. Players also have secret mission cards that gain extra points if the conditions are met.

What really makes the game fun is the follow action. During the active player’s turn, all other players may follow the active player’s action buy paying one culture. This is one of my favorite mechanisms because it limits the amount of downtime for everybody. If I had a few bad rolls on my turn, then I can get the actions I needed on someone else’s turn, as long as I saved up some culture.

I love the solo game: it manages to capture the feel of the real game and has various difficulty levels that range from beginner to epic. I’ve beaten the epic level only a few times and each win felt well-earned.