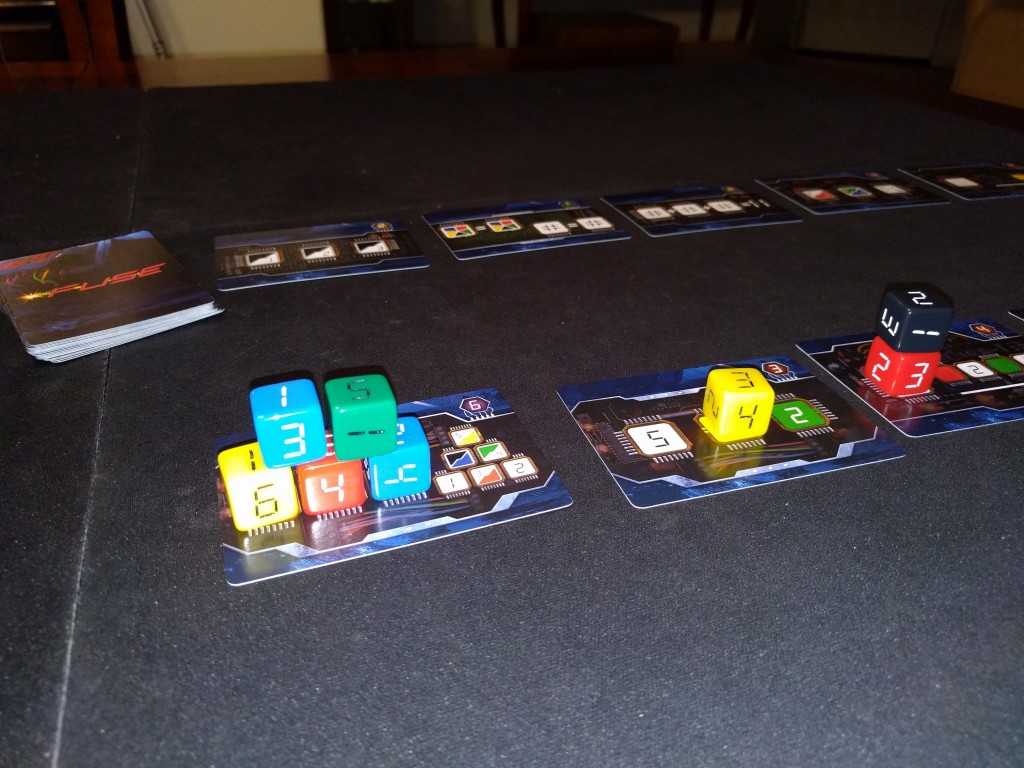 A lot of people post photos of the games they’ve bought during Gen Con. Thankfully, for those of us doing GenCant, we could also participate as good consumers, thanks to the annual Gen Con amazon.com sale. (Note: I’m sure that Cool Stuff Inc. and Miniatures Market also had sales, but since I’m an Amazon Prime member, that’s where I do most of my game shopping.)

There were plenty of good games on sale at Amazon on Saturday, but there wasn’t plenty of money in my wallet. I’m a sucker for a good deal, though, so I went with a game I’ve had my eye on, FUSE. (By the way, here’s the link to the games that were on sale.)

FUSE is a real-time dice game by designer Kane Klenko, who created one of my favorite cooperative games, Dead Men Tell No Tales. In FUSE, players are trying to defuse bombs on their spaceship. One player reaches into a bag of different-colored six-sided dice, pulls out dice equal to the number of players and each player tries to use a die on one of their two bomb cards. The cards have icons that indicate what dice are needed to defuse the bomb; for example, there might be several icons for a certain number or color to be placed on the card, or there could be conditions such as the dice must equal a certain sum or be larger than the preceding dice on the card, etc. Any unused dice that turn are re-rolled and players must take a die matching the number or color of the re-rolled die off their bomb cards and place it into the bag.

Once the correct dice are placed on a card, the bomb is defused and the card is placed away from the player, who draws another bomb card. Players have 10 minutes to defuse all of the bombs in the deck (16-29 cards, depending on number of players and difficulty level).

So it’s rolling dice and set collection, right? Well, this is what turned me into a fan of FUSE: it also contains a dexterity element. Some of the bombs must be defused by placing dice in a tower or a pyramid. If a die happens to fall off your soon-to-be-completed tower or pyramid, then you take all of your dice on that card and put them back in the bad. Bummer! As the rule book states, bomb defusing is a delicate business.

I solo played it twice tonight to learn how to play. It’s tough! I was in training/easy mode and only cleared 13 the 16 bomb cards necessary to win, but this is one of the games that I know will be a hit during family game night. We love Escape: The Curse of the Temple and this has a similar feel with its fast dice-rolling and cool soundtrack, which in this case is a hilarious robot voice that counts down the time remaining until your spaceship is blown to smithereens.